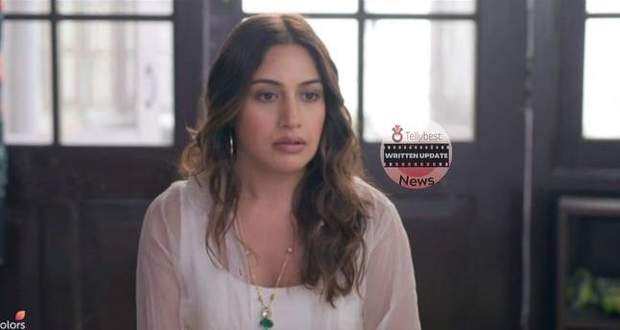 Today's Sherdil Shergill 10th October 2022 episode starts with Manmeet waking up from her sleep on hearing the sound of alarm and noticing that Rajkumar is not present in the room.

As Manmeet comes out to search for Rajkumar, she spots him sleeping on the sofa in a crooked position and feels guilty for it.

Manmeet silences the alarm and puts the blanket properly over Raj when she suddenly spots her aunt walking in their direction.

Getting nervous, Manmeet sits on Rajkumar after covering him completely with the blanket and acts like she is the only one there.

As her aunt proceeds to sit on the sofa, Manmeet stops her in a hurry and asks her to go to the garden with her so that they can have a peaceful talk.

In the meantime, Rajkumar wakes up after getting crushed under Manmeet and escapes back to the room after Manmeet leaves with her aunt.

The next day, Manmeet helps Gunjan select her dresses for the wedding and other functions and comes to Anmol after hearing him cry.

While trying to persuade Anmol, Manmeet’s eyes fall on Rajkumar who is sleeping beside crying Anmol like a log of wood.

Manmeet wakes up Raj and asks him to get ready as they have to leave for the wedding venue soon.

Rajkumar wakes up with a disheveled look and averts his eyes from Manmeet while adjusting his shirt.

After a while, Manmeet asks Puneet why she did not come to her room last night to which Puneet acts oblivious and says that they were helping her in her marriage act.

Puneet tells Manmeet that she and Rajkumar have to do a dance at Gunjan’s sangeet and leaves with Anmol.

Seeing Manmeet searching through the room, Rajkumar teases her for being organized while Manmeet informs him that they are out of diapers for Anmol.

The Mehendi event starts with Rajkumar bumping into Puneet, who says they will be happy if he becomes their son-in-law rather than acting.

Ajeet comes to Rajkumar with a straight face and asks for his size (of shirt) which scares Rajkumar.

After Ajeet, Ajeet’s elder brother gets hold of Rajkumar and begins to inquire about his family but Manmeet saves him.

As Manmeet and Raj were about to leave, Manmeet’s aunt pulls them back to the function and asks them to join everyone in the dance.

While dancing, Rajkumar’s eyes meet with Manmeet’s but she snaps him out of his “delusion” with a jerk.

After Manmeet and Raj leave for the market to buy diapers for Anmol, Gunjan’s in-laws arrive and ask for Manmeet.

They say that they are interested in seeing how Manmeet will plan her life as she is still unmarried.

© Copyright tellybest.com, 2022, 2023. All Rights Reserved. Unauthorized use and/or duplication of any material from tellybest.com without written permission is strictly prohibited.
Cached Saved on: Monday 21st of November 2022 07:14:22 PMCached Disp on: Wednesday 7th of December 2022 01:16:41 PM