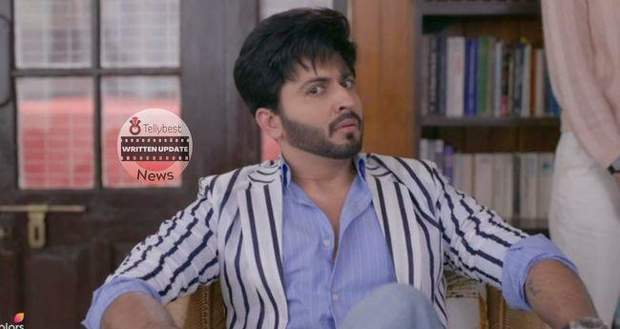 Today's Sherdil Shergill 11th October 2022 episode starts with Gunjan’s mother-in-law expressing her worry about Manmeet’s marriage and assuring them that Manmeet will settle down quickly soon.

While leaving, Gunjan’s mother-in-law calls Gunjan and tells her that she has invited a family which could be perfect for Manmeet to marry.

Gunjan gets shocked to discover that her mother-in-law has called a family for Manmeet’s marriage without telling them first.

However, without raising her voice, Gunjan nods in agreement and bids goodbye to her in-laws.

Meanwhile, Raj tells Manmeet about her parents’ intentions of turning them into a real couple as they think Manmeet is lying to them.

Manmeet connects the dots and agrees with Raj and asks him to leave Shimla after Mehendi gets over.

At first, Raj refuses to leave as he has to confront Nikki, but after Manmeet sets up a perfect excuse of attending a meeting in London and staying in the hotel for the remaining days, he agrees to follow it.

Raj tells Manmeet that after coming there with her, he got to see a new side of Manmeet Shergill who loves her family more than anything.

Manmeet gets too immersed when Raj says that he is proud of her but snaps herself out of it.

After Manmeet and Raj return, Gunjan tells Manmeet that she has something to tell her but Ajeet hurries them to leave for the venue.

On reaching the venue, Gunjan informs Manmeet that her mother-in-law is bringing a marriage-based relationship for her.

Manmeet gets shocked to hear that and tells Gunjan that Anmol is her real son and she cannot think about marriage in the current situation.

Gunjan suggests that Manmeet should talk to her mother-in-law when she sees an opportunity in the function.

Later, the Mehendi function starts with everyone arriving at the venue along with Manmeet, Raj, and Anmol.

The relatives begin to whisper amongst themselves on seeing Manmeet holding a baby but her aunt explains to everyone that Anmol is Manmeet and Raj’s son.

Seeing Anmol cry, Ajeet almost touches his hand which gets noticed by Rajkumar.

After a bit, Rajkumar intentionally leaves Anmol playing on the carpet alone and stops Manmeet to go to him when he starts crying.

Ajeet notices Anmol crying and calls Puneet or Manmeet to pacify Anmol but no one comes.

As Anmol holds onto Ajeet’s leg while crying, Ajeet fails to control himself and takes Anmol in his lap with loving eyes.

Manmeet gets overwhelmed with tears on seeing that and hugs Rajkumar dearly while thanking him for doing that for her.

Rajkumar feels fulfilled from his inside on seeing Manmeet crying with joy.

© Copyright tellybest.com, 2022, 2023. All Rights Reserved. Unauthorized use and/or duplication of any material from tellybest.com without written permission is strictly prohibited.
Cached Saved on: Monday 21st of November 2022 08:58:13 AMCached Disp on: Wednesday 7th of December 2022 01:19:46 PM