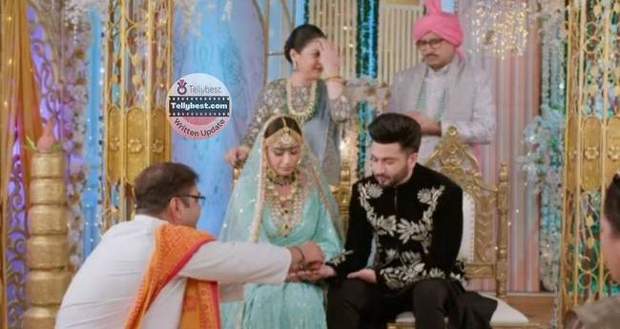 This article gives a glimpse of the future story as the episode did not telecast on 12th December 2022 because of the telecast of the new serial Durga and Charu.

Rajkumar asks Manmeet whether she wants to marry even though the auspicious time has passed.

Manmeet thinks about the dangers Anmol went through since he entered the Yadav house.

However, she also thinks about the time when Raj saved him despite all the dangers.

Manmeet looks at Raj doubtfully but Raj instead looks at Manmeet lovingly hoping for a yes.

Meanwhile, Priyanka talks to Pankhudi that Manmeet will not agree to the marriage as Anmol is the most important person in her life.

Murari stands there hoping for a no while Bhairav wishes the same.

Surprising everyone Manmeet says yes as she is sure that whenever any danger will come on her or Anmol, Rajkumar will always be there to protect them.

Priyanka and Pankhudi get shocked to hear Manmeet's decision as they were sure that the marriage will get broken off after their plan.

© Copyright tellybest.com, 2022, 2023. All Rights Reserved. Unauthorized use and/or duplication of any material from tellybest.com without written permission is strictly prohibited.
Cached Saved on: Wednesday 25th of January 2023 12:06:38 PMCached Disp on: Tuesday 31st of January 2023 06:51:41 PM