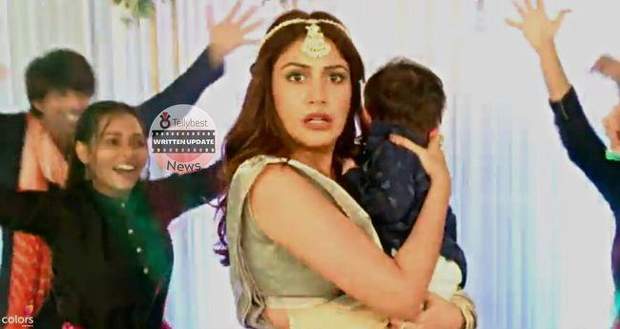 Today's Sherdil Shergill 12th October 2022 episode starts with Manmeet hugging Rajkumar and thanking him for uniting Ajeet and Anmol with each other.

Raj tells Manmeet he is a way better person than she thinks and proudly takes the credit as Manmeet watches Ajeet with Anmol.

Manmeet goes to Ajeet and hugs him with tears in her eyes to which Ajeet also accepts her with open arms.

After the emotional moment calms down, Rajkumar and Manmeet reveal to Puneet that Rajkumar has to leave for an urgent meeting in London.

Puneet tries to stop Raj from leaving but Manmeet and Raj urge her that it is very important.

Knowing that the meeting is just an excuse, Puneet asks Ajeet to talk with Raj and stop him from leaving.

Ajeet goes to Rajkumar and tells him that he is thankful to him for taking care of Manmeet while she was in Mumbai all alone.

Ajeet requests Rajkumar not to leave as seeing him with Manmeet is making Puneet very happy even if it’s fake.

Rajkumar agrees not to leave and shows up at the sangeet ceremony shocking Manmeet.

As Manmeet asks Raj why he did not leave, Raj says that he wants to enjoy the function while singing and dancing.

Manmeet leaves the decision to Raj and makes it clear that everything from then on is Raj’s responsibility.

The dance performances start with the family members of Manmeet giving a splendid performance along with Gunjan.

Next, the host calls Manmeet and Rajkumar onto the stage saying that they will give a dance performance with their son.

As the in-laws of Gunjan arrive, Gunjan gets nervous and reveals the truth to Puneet that her mother-in-law is going to bring a marriage proposal for Manmeet.

Puneet gets furious with Gunjan but calmly reveals the truth to her in-laws that Manmeet is already married and has a son.

Gunjan’s mother-in-law is left stunned after learning the truth while her husband already is on his way to the function with Bhairav and his wife.

Manmeet and Rajkumar dance with each other enjoying themselves along with Anmol when Manmeet notices Bhairav and his wife standing there with wide eyes.

Rajkumar stops dancing as his face turns into a horrendous one seeing his parents standing in front of him.

Bhairav asks the host who the people on the stage are to which he replies that the lady is the bride’s elder sister and the man is her husband, and the child is their baby.

Without wasting another minute, Bhairav walks out from there with his wife following him.

Gunjan’s in-laws run to stop Bhairav as they want to lock in a deal with him about building a hotel.

After stopping Bhairav, they apologize to them because they were unaware that Manmeet was already married.

Bhairav’s wife says that the man Manmeet is married to is their son, Rajkumar and they are not even aware of their marriage.

Meanwhile, Manmeet and Rajkumar discover that Rajkumar’s family was the one who came to meet Manmeet for marriage.

Manmeet reveals that Raj is no one else but the son of Bhairav Singh Yadav, Rajkumar Yadav.

Everyone’s mouth gets wide open upon realizing the situation, Rajkumar stumbles in his steps because of the mess.

Manmeet tries to calm down Rajkumar and tells him that they will coin a solution together but Rajkumar blames her for all the things.

Manmeet reminds him that it was he who came with her to escape from Nikki and decided to stay here even though she asked him to leave.

Later, Ajeet and Puneet come to the hotel room of Bhairav to have a talk with them.

Puneet denies Ajeet from telling the truth as they cannot let Gunjan’s in-laws know that Manmeet is a single mother.

However, Rajkumar refuses to lie to his parents and leaves by himself to tell the whole truth to them while Manmeet rushes after him to stop him.

© Copyright tellybest.com, 2022, 2023. All Rights Reserved. Unauthorized use and/or duplication of any material from tellybest.com without written permission is strictly prohibited.
Cached Saved on: Monday 21st of November 2022 03:22:35 AMCached Disp on: Saturday 10th of December 2022 03:34:43 PM