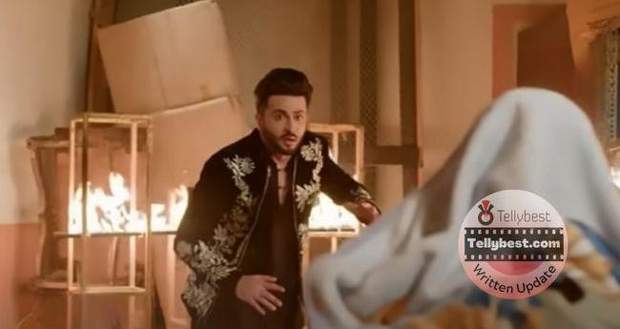 Manmeet says that she just wants to move forward in this relationship.

Nirali butts in and says that this is wrong as a mother, she knows what’s best for her child better than anyone else and turns to Bhairav’s aid.

With a stern voice, Bhairav says that the wedding will continue as he will always put his child’s needs before anything or anyone else.

Therefore, the wedding continues, and Pandit Ji tells Raj to continue with the left-out rituals.

Raj ties the mangalsutra around Manmeet’s neck and teases her while putting Sindur on her forehead.

The Yadav’s are filled with discontentment seeing Raj marry Manmeet.

The pandit Ji calls the bride and groom to begin the Phere, while everyone showers them with flowers.

Enraged Nirali tries to storm the wedding but Bhairav holds her and tells her to force a smile for one more hour.

Hearing this Nirali digs her nails into Bhairav’s skin making him bleed and seeing his wife’s anger he asks that will she take all her anger out on him.

Further, she says that Manmeet is nothing but bad luck for the Yadav family and says because of her Raj’s hand got burned.

Meanwhile, Bhairav’s blood starts to drop onto the floor and Nirali says that on Manmeet’s first day in this house she started the fire so how can Nirali accept a daughter-in-law like that?

Bhairav forces Nirali to accept the fact so she promises that she will never accept this wedding and will bring hell for Manmeet.

Meanwhile, the wedding is completed and they take the blessing of all the elders.

Ajeet blesses Raj and Manmeet and tells them to take care of each other.

Later, Puneet takes Anmol with her, Manmeet hugs Gunjan and they leave.

At the same time, Priyanka and Pankhudi discuss how they will ruin Manmeet’s life.

After a while in Raj’s room, Raj teases Manmeet and asks her why she did not lash out even once.

To this Manmeet says that she has always fought the world but now she doesn’t have to and she has to accept the fact that this is her family too.

In Bhairav’s room, Bhairav tells Nirali that she should take a sleeping pill and both of them should rest and then bounce back.

He further says that they have to take it slow and plan out everything smoothly or else Raj will leave the house.

Then, Nirali says that she will eradicate Manmeet from Raj’s life.

On the other hand, Priyanka scours the kitchen and takes red pepper with her.

Meanwhile, Manmeet unties her hair which entices Rajkumar and he rushes to hold her.

Manmeet tells him that she is unromantic and will not do any filmy stuff for him.

To this, he says that he will teach her how to be romantic, Manmeet shrugs him and walks away but he holds her hands.