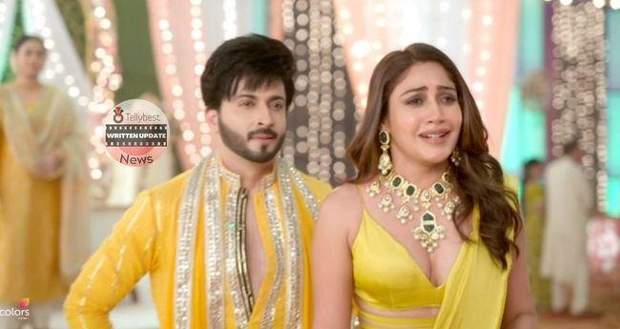 Today's Sherdil Shergill 13th October 2022 episode starts with Rajkumar leaving the event hall to reveal the truth to his parents with Manmeet going after him so that she can stop him.

When Rajkumar refuses to listen to Manmeet’s request and continues to walk away, Manmeet plays Rajkumar’s video of doing stand-up comedy.

Rajkumar stops in his track, turns back at Manmeet with a shocked face, and slowly walks closer to her.

Manmeet apologizes to Raj as she recorded his performances and tells him that if he says anything to anyone, she will show the video to his father.

Rajkumar sarcastically laughs on seeing Manmeet’s changed aura and asks her if she is blackmailing him with glaring eyes.

Seeing Rajkumar so angry, Manmeet tries to calm him and tells him that she is not trying to blackmail him but has no choice left with her.

Meanwhile, Ajeet and Puneet visit Bhairav and Mrinalini and suggest that they should talk peacefully after Gunjan’s marriage is over.

Inviting both Bhairav and Mrinalini to the marriage the next day, Ajeet and Puneet leave their room and meet Raj and Manmeet amid their argument.

Ajeet and Puneet ensure that Raj’s parents are fine and want some time to think, which calms Raj down a bit.

After Ajeet and Puneet leave, Raj says that he is not leaving anywhere and will do the real acting from now on as per Manmeet’s requirements.

Raj leaves with a furious face while Manmeet worries about what might happen next.

At night, Mrinalini suggests to Bhairav that Rajkumar was aware of the fact that he is going to come here with Manmeet.

Bhairav does not stretch the conversation and asks Mrinalini to go to sleep as they have to leave the next day early.

The next day, Manmeet spots Rajkumar at the wedding function and thanks him for not leaving the marriage midway.

Just then, Bhairav and Mrinalini come out of the lift and proceed to walk toward the exit with Raj and Manmeet going after them.

Bhairav serves himself some food from the buffet and sits to eat when Raj comes there with Manmeet to apologize to them.

Mrinalini tries to talk to Raj but Bhairav’s glare silences her and she averts her from Raj.

As Manmeet tries to talk, Bhairav tells her that she should attend her sister’s wedding and talk to them after she returns to Mumbai.

Rajkumar requests Bhairav for an opportunity to which Bhairav sarcastically tells him to fulfill his role as a “jija” in the wedding.

© Copyright tellybest.com, 2022, 2023. All Rights Reserved. Unauthorized use and/or duplication of any material from tellybest.com without written permission is strictly prohibited.
Cached Saved on: Monday 21st of November 2022 05:44:53 PMCached Disp on: Monday 5th of December 2022 01:18:42 AM