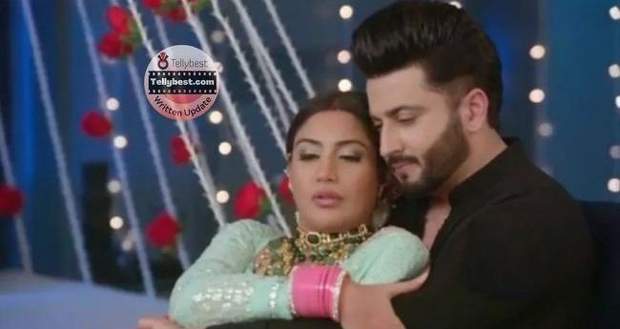 Today's Sherdil Shergill 14th December 2022 episode starts with Raj sitting on the bed with the veil and asking Manmeet to come with the glass of warm milk in a female voice.

Like an over-dramatic girl, Raj urges Manmeet to lift his veil like a groom whereas Manmeet grumbles that Raj is making her do weird stuff and she lifts the veil with irritation.

Raj calls Manmeet unromantic and orders her to lift the veil more gently.

Sitting on the bed, Manmeet obeys his order who pouts his lips to kiss Manmeet but pushing him away, Manmeet announces girls don’t behave this way on their first night.

Manmeet even informs Raj that now she will show him how men behave on their first night and Raj gets excited.

With a rose in her mouth, Manmeet again sits on the bed in a masculine style and pushes Raj onto the bed while singing a song.

She then starts coming closer to Raj who puts his arm around her in anticipation but before they come any close, they start coughing due to AC.

When Manmeet and Raj come to the hall, Bhairav questions them about what happened and Raj reveals someone must have mixed chili powder.

While everyone looks confused, a flashback shows how Priyanka has mixed Chili powder in the AC vent with the help of her husband.

Back in the present, Bhairav suggests Raj and Manmeet sleep in the guest room but Nirali chimes in that it does not look good if their new daughter-in-law sleeps there so Manmeet should sleep with Priyanka while Raj adjusts with Priyanka’s husband.

Raj denies it by saying that no one should face trouble for them and that everyone goes back to sleep.

After everyone walks away, Raj informs Manmeet that he is sure Priyanka has done it but Manmeet urges him to think about where his new wife will sleep in a flirty tone.

Later, Raj carries Manmeet to the terrace in his arms and once they lie down on the bench, Manmeet jokes that she still cannot believe she is married to Raj.

When Raj starts making remarks about the building being his father’s, Manmeet grabs his throat in anger but Raj just looks at her with love.

After locking his hands with Manmeet, Raj drags Manmeet close to him and while they are lost in each other’s eyes, Manmeet makes a sleepy gesture and falls backward on the bench.

When Manmeet mumbles she is feeling sleepy, Raj also whispers he is sleepy too with a disappointed look on his face.

The next morning, Manmeet blushes to recall last night's event but her smile vanishes when her eyes fall on Bhairav who is doing Yoga.

On the other hand, Pankhudi tells Nirali about Raj and Manmeet’s sleeping in the garden.

Later while Manmeet is talking to Puneet on her phone, Nirali arrives there and orders Manmeet not to wear western clothes anymore in the house.

When Manmeet tries to argue, Nirali announces she should have thought about it before marriage and further orders Manmeet to get ready for the Muh Dikhay ritual.

Later during breakfast, Raj's eyes get bigger when he notices Manmeet walking towards the table in a blue saree.

Looking at Manmeet and Raj, Bhairav cunningly narrates he remembers his first day after marriage and Niral takes Manmeet to the kitchen.

Once in the kitchen, Nirali advises the servant to help Manmeet whenever she enters the kitchen.

© Copyright tellybest.com, 2022, 2023. All Rights Reserved. Unauthorized use and/or duplication of any material from tellybest.com without written permission is strictly prohibited.
Cached Saved on: Wednesday 25th of January 2023 03:50:48 PMCached Disp on: Thursday 9th of February 2023 04:43:03 AM