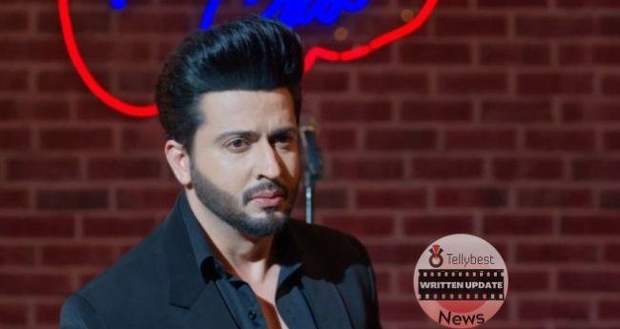 Today's Sherdil Shergill 14th November 2022 episode starts with Manmeet in her cabin looking at her family photo when Raj comes in and coughs to get her attention.

Her smile quickly vanishes, she stands up for him and he says to her that she has encroached on the cafeteria area.

Manmeet compares him to a security guard and says that she has been setting up her office for the past 3 hours, if he had a problem he should have said it before.

Husain enters and says to Manmeet that he is going to Mr. Yadav but Manmeet calms him and says there is no need to do so.

However, Husain says there has to be a limit to Raj’s rudeness.

Manmeet mumbles to herself that he’s not rude but hurt and doesn’t understand what to do.

Husain is still infuriated but all of a sudden Manmeet starts laughing at the site of Mishra Ji, puzzled Husain turns and understands why she started laughing all of sudden and says that they should discuss things at night.

They decide to meet at 8:30 and will share the location.

Mishra Ji enters Raj’s new office with his nameplate and says he can provide any sort of assistance Raj might need.

When Raj asks him for information, Mishra Ji tells him that Manmeet and Husain are going out for dinner.

On the other hand, Manmeet gets ready for dinner and remembers her celebrating with Anmol and thinking that her dream came true.

Raj comes uninvited to return her 5 lakhs, and is adamant to leave and calls a chef with noodles but Manmeet rushes him out.

Raj names Manmeet "Jaan" and threatens her that if she doesn’t resign she will have to face many such issues.

Later, Manmeet and Husain, are called to a location where Raj awaits them.

Meanwhile, a Jyotish is summoned to Yadav's house, and he predicts that Raj will be deeply hurt by someone he cares about.

Raj tells everyone that his father bought this house and he wants to get it renovated by his talented team.

Manmeet takes the keys to Raj’s room, and he tries to tease her by opening his buttons.

Rajkumar taunts Manmeet by saying he can pull off the act of being a playboy very well and comes incredibly closer to Manmeet's lips as if he is going in for a kiss.

Manmeet bails out at the last minute and tries to calm herself while Rajkumar jokes about both of them getting locked in the room together.

Asking Manmeet to answer the question he has asked her, Rajkumar directly questions Manmeet if she loves him or not.

Manmeet gets silent on hearing Rajkumar's question as she is not ready to confront him regarding her feelings.

© Copyright tellybest.com, 2022, 2023. All Rights Reserved. Unauthorized use and/or duplication of any material from tellybest.com without written permission is strictly prohibited.
Cached Saved on: Monday 21st of November 2022 05:55:44 AMCached Disp on: Sunday 4th of December 2022 11:25:10 PM