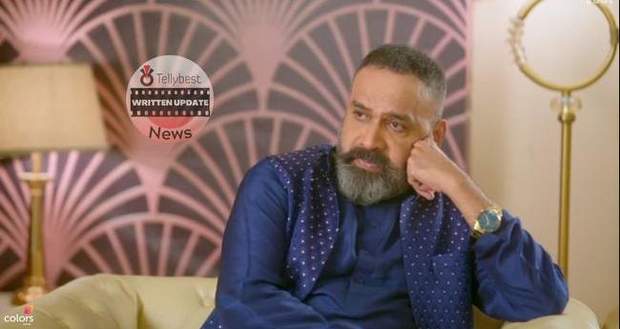 Today's Sherdil Shergill 14th October 2022 episode starts with Bhairav and Nirali leaving for Mumbai after warning Rajkumar that he will have to confront them after he returns home.

Manmeet and Rajkumar return to the wedding function and the marriage rituals start.

During the wedding, the priest asks Gunjan’s brother to come forward, and the relatives say that Gunjan does not have any brothers.

Rajkumar steps in and says that he will do the ritual as he is like a brother to Gunjan.

Gunjan thanks Raj with teary eyes while Manmeet also realizes how much Raj cares for her family while his own family is at stake.

As Raj struggles to bind the knot between Gunjan and Roshan, Manmeet helps him in doing that while Ajeet and Puneet admire them together.

After the wedding gets completed, Rajkumar books a cab for the Chandigarh airport as he needs to return as soon as possible.

Manmeet overhears Rajkumar’s conversation with the receptionist and decides to return to Mumbai together with him.

As Manmeet tells Ajeet and Puneet about returning to Mumbai the same night, they get shocked and ask Manmeet to stay a few days more.

Manmeet explains to them that she needs to resolve the matter with Raj’s family by telling them the truth.

Later, Ajeet goes to Manmeet to comfort her and assures her that she can share anything with him without getting scared.

Gunjan complains to Puneet that they always give more importance to Manmeet on every occasion which upsets her.

The “vidayi” takes place with Gunjan leaving with Roshan after shedding tears.

Manmeet says that she will also leave with Rajkumar which leaves him confused.

Ajeet tells Rajkumar that he has become an undeniably deeply cared for member of their family and they will miss him.

Hearing that, Rajkumar looks at Manmeet with a scared and confused face.

© Copyright tellybest.com, 2022, 2023. All Rights Reserved. Unauthorized use and/or duplication of any material from tellybest.com without written permission is strictly prohibited.
Cached Saved on: Monday 21st of November 2022 07:21:18 AMCached Disp on: Thursday 1st of December 2022 11:08:21 AM