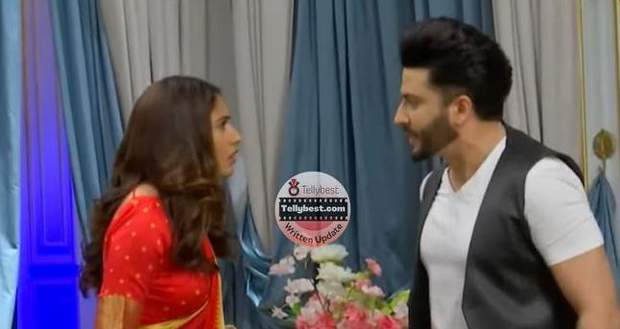 Nirali even urges Manmeet to make whatever dish she can make and Manmeet questions her when she will go to the office if she is busy with responsibility.

In reply, Nirali announces that Manmeet can cook the morning breakfast and she will take over in the noon.

While Manmeet looks relieved, Nirali announces she will help Manmeet to cook dinner.

Manmeet then urges Nirtali to do breakfast late but Nirali informs her sternly that they don’t eat with men in the house.

When Manmeet reminds Nirali that Pankhuri is eating with Raj, Nirali announces she is the house’s daughter, so this rule does not apply to her.

Manmeet however drags Nirali out of the kitchen and once in the hall, she questions Bhairav if Nirali can eat with them.

Manmeet even makes Nirali sit down while announcing Nirali works very hard so she deserves to eat with all the family.

When Nirali looks at Manmeet with surprise, Manmeet mutters since she is the new daughter-in-law of the family the rules will change.

Later, Bhairav, Nirali, and Pankhudi are discussing Manmeet’s behavior and Pankhudi yells that they are making a mistake by thinking Manmeet is a weak opponent.

Bhairav however orders Pankhudi to close her mouth and announces in a cold voice it is not always necessary to beat the opponent as sometimes they can defeat the queen without doing anything.

Hearing this, Nirali calls Puneet to order her to keep Anmol with her for some time who informs Nirali that Anmol cannot stay away from Manmeet for long.

When Nirali announces Anmol’s arrival will create questions among the guests, Puneet agrees to keep Anmol with her reluctantly.

In the meantime, Raj enters the room with such force and after closing the door, Raj hugs Manmeet from behind.

He even flirtingly tells Manmeet that he will spend time with her since the pandit has ordered him not to go out of the house for one week.

Sitting on the bed, Manmeet orders Raj to go to work because if he stays at home he will cause her distraction.

Raj tries to push Manmeet onto the bed romantically after ignoring her order but Manmeet stands up which irritates Raj and he announces he will take a leave moth leave since he is the boss.

He even calls Manmeet unromantic for always ruining his mood

While Raj tries to stand up, he is about to fall but Manmeet catches him in his arm, and looking at Raj with teasing eyes, Manmeet roams her fingers around his face.

Raj looks at Manmeet with an excited smile and Manmeeet orders Raj not to call her unromantic again in a low whisper.

She even hugs Raj but Nirali calls out to Raj causing Manmeet to push him away.

Later, Manmeet gets stunned to see herself in a red saree and a lot of gold jewelry, and even when Raj video-calls Manmeet, he laughs out loud.

Afterward, Pankhudi suggests Manmeet keep a long veil who questions how she will walk with this but Pankhudi orders her to keep it.

Later on one hand, during the ritual, Manmeet gets happy to see Anmol and runs to pick him causing her veil to fall; on the other hand, Gunjan asks Raj for some cash.