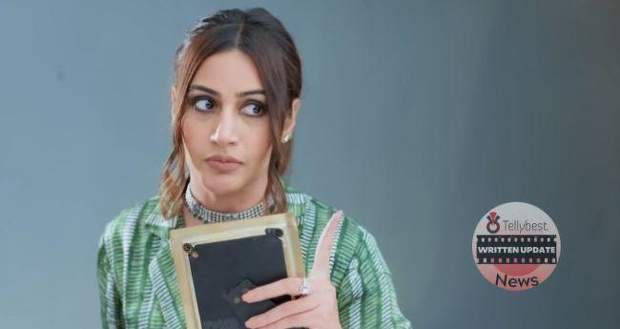 Today's Sherdil Shergill 15th November 2022 episode starts with Manmeet asking Rajkumar to let her go but he refuses to do so and continues to hold onto her hand.

Rajkumar continues to ask Manmeet to confess that she is in love with him but Manmeet does not utter a word.

After the tension subsides a bit, Rajkumar asks Manmeet to put balm on his back as he got injured earlier.

Rajkumar proceeds to open his shirt but Manmeet stops him and says that he is not allowed to strip his clothes.

Manmeet puts the balm on Rajkumar’s back while he tries to irritate her by asking her to change her position every 2 seconds.

Manmeet pinches Rajkumar hard making him scream in pain which Hussain hears from outside the room.

Hussain asks Rajkumar if he is all right to which Rajkumar responds quickly making Manmeet feel relieved.

Manmeet escapes from the room unable to bear Rajkumar’s flirtatious comments and asks herself why Raj is doing so with her.

Later at night, Hussain calls Manmeet and asks her when she is coming to the party.

Manmeet says that she is not going to the party as she is busy doing the designs for which Rajkumar called her there.

However, a man comes and hands Manmeet a box along with a letter saying that Rajkumar has sent it for her.

In the letter, Rajkumar says that if she does not come to the party wearing the dress that he gave her, then he will understand that she loves him.

To prove that she does not love Rajkumar, Manmeet arrives at the party wearing the beautiful dress that Rajkumar sent her.

Rajkumar freezes in his position as his eyes fall on Manmeet and asks her for a dance.

Taking Manmeet’s hand and wrapping another around her waist, Rajkumar dances slowly while staring into her eyes.

As the tension builds up between them, Rajkumar slowly moves closer to Manmeet’s lips leaving a few centimeters for their lips to collide with each other.

Manmeet pushes away Rajkumar at the last moment and enters a room that turns out to be the freezer.

Rajkumar also comes after her and realizes that the door can be opened from outside only.

Seeing Manmeet shivering in the cold, Rajkumar gives his jacket to her and finds a rod to open the door somehow.

© Copyright tellybest.com, 2022, 2023. All Rights Reserved. Unauthorized use and/or duplication of any material from tellybest.com without written permission is strictly prohibited.
Cached Saved on: Monday 21st of November 2022 01:55:11 AMCached Disp on: Friday 9th of December 2022 04:01:58 AM