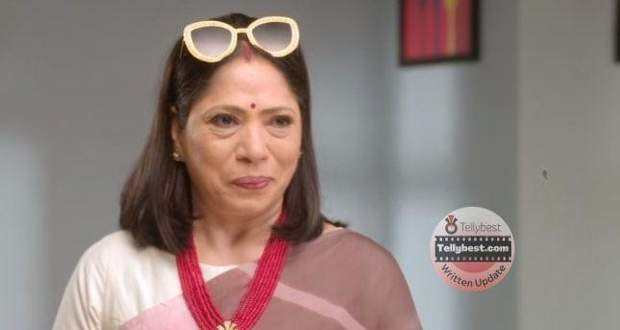 Today's Sherdil Shergill 16th December 2022 episode starts with Manmeet pacifying Anmol after Vidya brings him to her in the middle of the rituals.

Nirali asks Manmeet why Anmol is here in the middle of the guests to which Manmeet replies that he was crying without her.

The guest question Nirali to whom the child belongs as they see Manmeet playing with him after taking him to a side.

Pankhudi says that Manmeet is playing with her maid’s child as she loves children which pleases the guests.

Meanwhile, Gunjan comes to meet Rajkumar at the office and asks for his help in arranging some money.

Puneet searches for Vidya as she went out with Anmol and bumps into Gunjan’s mother-in-law.

Gunjan’s mother-in-law asks Puneet how she can entrust Anmol to a stranger maid who is not a part of their family.

Puneet says that Vidya is not a maid and has been caring for Anmol since birth.

Nirali calls Puneet and asks her why Anmol and Vidya have come there in the middle of the rituals and guests when she asked her to keep them away.

Puneet tells Nirali that she was unaware that Vidya took Anmol there and assures her that everything will be all right.

After Puneet calls Vidya and asks her to get out of there with Anmol as soon as possible, Vidya tells Manmeet that she is handling Anmol.

Meanwhile, Gunjan asks Rajkumar to lend her 2 crores as her in-laws have experienced a loss because of Bhairav.

Rajkumar assures Gunjan that he will help her while she asks him not to disclose their conversation to Manmeet.

The rituals resume and everything gives gifts to Manmeet after seeing her face and complimenting her.

The guests ask Nirali why her daughter-in-law is so bossy and asks her to keep her in control.

Manmeet brings Anmol with her while clicking the picture with the guests which causes a problem.

The lady asks Manmeet not to love her maid’s child so much which offends her gravely.

Manmeet says that Anmol is her son and Rajkumar is his father to which Nirali says that Rajkumar has no relation with Anmol.

The guests start to criticize Manmeet and Anmol which angers Manmeet and she asks them to leave.

Nirali gets furious after the guests leave and blame Manmeet and Anmol for all the mess.

Manmeet asks Nirali why they agreed to her and Raj’s marriage if they had so many problems with Anmol.

Nirali pounces on Manmeet and falls on her own on the sofa as soon as she spots Rajkumar and Bhairav coming inside.

Later, Manmeet gets to know about Puneet trying to keep Nirali’s word and decides to talk to Rajkumar about the matter.

Nirali asks Rajkumar how he will feel if her wife insulted his mother in front of everyone by calling her uneducated and uncultured.

Rajkumar asks if Manmeet has said those things to Nirali.