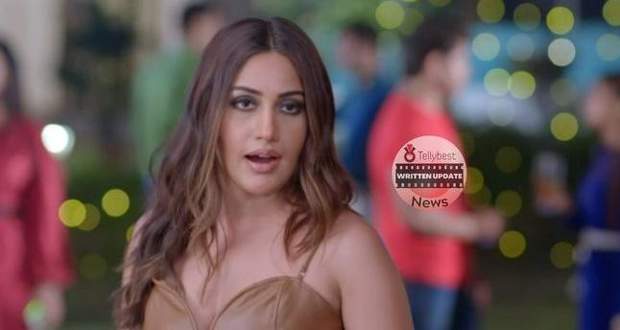 However, Raj drops a coconut on Mishra Ji’s shoes.

Raj holds his collar and guardedly tells him that a change in relation happened between Raj and Manmeet but not for Mishra Ji, for Mishra Ji Manmeet is still madam.

On the other hand, Hussain is angrily pacing around telling Manmeet that Raj’s behavior towards her is getting too disrespectful.

Manmeet tells him that she does not care what Raj does with her in a resentful tone but she won’t let him do anything to Sky City.

Just then, Raj enters Manmeet's office with someone.

Raj appoints the new man as the chief architect and brings him to tell Manmeet that her idea worked with the new architect as he can increase sky city by 10 floors.

Later that night, Manmeet calls her parents and asks how they are, and wonders when they will come back.

Meanwhile, Raj gets massages from Radhe.

Radhe comments on Manmeet that she looks like a perfect match for Raj.

Raj gets excited to hear this and asks Radhe to continue.

Radhe further says that the way Manmeet defended Raj after the Shimla trip she looked like Raj’s true partner.

Radhe even says that whatever happened in the ring ceremony happened so that Raj and Manmeet could come closer.

In the office, Raj has a meeting with the new chief architect where he asks about the possibility of adding 10 new floors to the Sky city project.

Manmeet and Hussain enter the office and Raj calls in Manmeet and orders her to bring him coffee.

Husain angrily points his finger at Raj and tells him that Raj has done enough.

Raj tells Manmeet that he and Hussain will talk it out while she gets him coffee.

Manmeet calms Hussain and takes him out to make coffee for Raj.

Manmeet makes coffee and gets coffee for Mishra Ji, Jasmine, and Raj in Raj’s office.

Raj feels bad seeing Manmeet like this but he masks his emotions and rudely tells Manmeet to leave early.

Mr. Yadav, Raj’s father brings in investors and introduces them to the M.D. of the company.

The investors call in a retired officer to check the project plans.

Mr. Patekar, the investigator asks why they wanna increase the 140-floor plan even more by 10 floors.

He even asks where Manmeet is when Karan is presented as the chief architect but Mr. Patekar refuses this and asks for Manmeet herself.

© Copyright tellybest.com, 2022, 2023. All Rights Reserved. Unauthorized use and/or duplication of any material from tellybest.com without written permission is strictly prohibited.
Cached Saved on: Monday 21st of November 2022 02:31:31 AMCached Disp on: Wednesday 7th of December 2022 03:10:46 PM