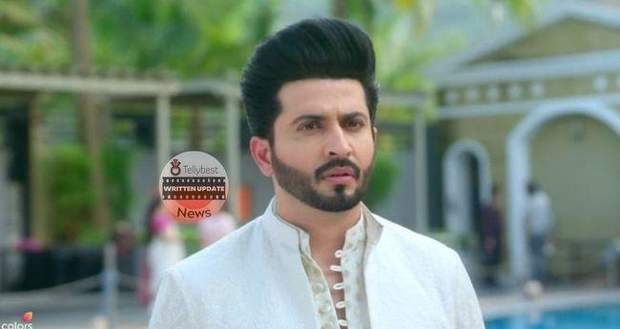 Today's Sherdil Shergill 17th October 2022 episode starts with Rajkumar being worried about Manmeet leaving her family at home to help him while she tells him that they should focus on him.

Manmeet further turns to apologize to him and even deletes the video in front of him saying that she took the video of him just for fun.

On the other hand, Rajkumar's family members are gossiping about him as Bhairav comes there and makes them disperse.

Bhairav orders Nirali to go and cook while he takes his son-in-law with him.

The son-in-law further tells Bhairav that he also heard Mr. Mishra talking about an affair between Manmeet and a junior.

Bhairav tells him that he is also eager to learn the truth but the truth is known by only Manmeet and Rajkumar.

The next morning, Rajkumar and Manmeet are at the airport where he keeps worrying about the meeting with Bhairav.

He also gets a call from his girlfriend who threatens him to tell her who the baby is with him or else she will come to his house.

Outside, Jatin comes to pick him up with strict orders from Bhairav which scares Rajkumar.

Manmeet gets confused with Raj being called 'Mama' and Raj lies that he and Jatin are cousins and call each other 'Mama' (uncle) affectionately.

Meanwhile, at home, Manmeet's family is waiting for him impatiently and rush out of the house once they hear a car honking.

However, Nirali gets upset seeing that it is Choti and her family while Bhairav reveals that he called them there.

Choti runs to hug her father, Bhairav while the family rushes inside.

Once inside, Choti argues with Bhairav that Manmeet is trapping Rajkumar and that she is just their slave/servant.

Bhairav tells her to mind her language and address Manmeet as Shergill Madam.

Just then, the son-in-law comes there and informs them that Rajkumar is there with both Manmeet and the child.

Manmeet gives the baby to the caretaker and goes to talk to Bhairav.

Manmeet requests Bhairav to hear her out and reveals to him that everything he saw at her sister's wedding was an act.

Bhairav asks her what she means to say and Manmeet reveals how she got pregnant through IVF and made Rajkumar act as her husband so that Gunjan's wedding does not get canceled.

Bhairav tells Manmeet that she should have at least told him when they saw him at the wedding but she reasons that she feared that he would accidentally reveal the truth to Gungun's in-laws.

Manmeet turns to Rajkumar and signals him to talk to his father.

Being careless, Rajkumar tells Bhairav that it was not Manmeet's fault as their plan was going smoothly until he came to the wedding.

© Copyright tellybest.com, 2022, 2023. All Rights Reserved. Unauthorized use and/or duplication of any material from tellybest.com without written permission is strictly prohibited.
Cached Saved on: Monday 21st of November 2022 06:36:02 PMCached Disp on: Thursday 1st of December 2022 11:21:43 AM