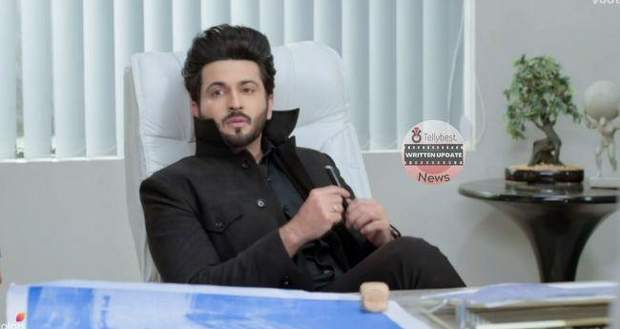 Today's Sherdil Shergill 18th November 2022 episode starts with Pategaar asking Bhairav where Manmeet is as he needs to speak to her about Sky City’s architectural aspect.

Bhairav tries to distract him from Manmeet’s topic but Pategaar begins to leave when said that Manmeet cannot come to the meeting.

Seeing the investors leaving, Bhairav presents an excuse that Manmeet is busy looking after her child and asks Rajkumar to bring Manmeet to the meeting anyhow.

Rajkumar reaches Manmeet and asks her to come back to the meeting as the investors are asking for her.

Manmeet asks Rajkumar why she should go back when her position has been given to another architect.

Rajkumar insists Manmeet return with him so that the company does not have to face a loss.

Manmeet returns to her cabin and searches for the resignation papers Raj handed her so she can leave the company.

Raj snatches the papers from Manmeet’s hand and tells her that she is not going anywhere from the company.

Seeing Manmeet’s attitude, Raj asks her what she wants in exchange for attending the conference meeting.

Manmeet calls Sharda and asks her to print a memorandum stating that Rajkumar will never dismiss her from the chief architect position in the Sky City project.

Rajkumar signs the paper and brings Manmeet to the meeting which calms the investors a bit.

Paategar asks Manmeet straightforwardly if they can add 10 more floors to the building as Bhairav wants additional funds for the project.

Manmeet replies that adding any extra floors to Sky City is impossible as the base has been built to accommodate only 140 floors.

Hearing Manmeet’s explanation of how the building can collapse if any extra floors are built, Paategar gets furious at Bhairav for trying to scam people.

The other investors also bail out the deal as they do not want to risk any human lives for money.

Rajkumar goes after the investors to apologize to them while Manmeet goes to her cabin with Hussain.

Bhairav bursts into anger at Karan and slaps him for his incompetence in front of the investors.

Manmeet stops Bhairav from beating Karan and asks him if he is in his right mind or not.

However, Bhairav crosses his line of decency and tells Manmeet how much damage she did to him.

Bhairav attacks Manmeet with abusive language objectifying her as a woman who is inferior to men.

Manmeet loses her control over her temper and strikes back at Bhairav warning him that she can make him get arrested for sexual harassment.

Bhairav loses his mind and even threatens to get physical with Manmeet which leaves everyone shocked.

Hussain and Sharda calm Manmeet while she loathes herself for behaving in such a way with Bhairav.

Rajkumar asks Manmeet what happened between her and Bhairav but Manmeet does not answer him.

Later, as Manmeet stresses herself with Bhairav’s harsh remarks, Rajkumar asks and insists she tells him everything as he worries about her.

Rajkumar comes back to Bhairav and asks him about the incident to which Bhairav replies that a woman has hurt his self-pride.

Later, Manmeet watches the news and learns that three laborers have died while working at the Sky City site which leaves her in shock.

The police arrive and announce that Manmeet is to be arrested for the accident.

© Copyright tellybest.com, 2022, 2023. All Rights Reserved. Unauthorized use and/or duplication of any material from tellybest.com without written permission is strictly prohibited.
Cached Saved on: Monday 21st of November 2022 12:55:57 AMCached Disp on: Thursday 1st of December 2022 11:47:04 AM