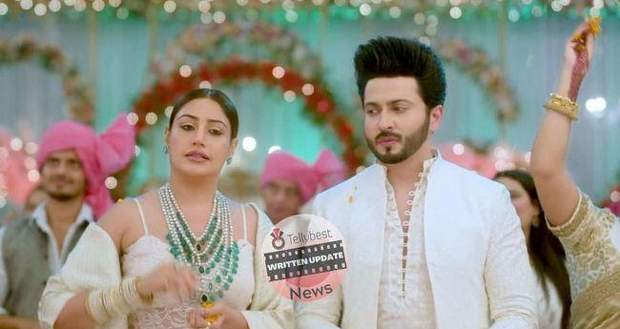 Today's Sherdil Shergill 18th October 2022 episode starts with Rajkumar accidentally spilling that his and Manmeet’s plan was going all right until Bhairav and Nirali popped up there and spoiled everything.

Hearing Rajkumar’s statement, Bhairav’s facial expressions change and he rubs his feet slowly while Manmeet tries to handle the situation.

Manmeet says to Bhairav that all that he saw at the marriage was just an act and there is nothing to be afraid of.

However, Bhairav ignores Manmeet and slowly walks toward Rajkumar who understands what is about to come upon him.

Bhairav takes off his shoes and begins to beat Rajkumar while he tries to escape.

The whole family tries to save Raj from getting hit by Bhairav while Manmeet stands at the side with a confused face.

Bhairav asks Rajkumar why he agreed to be a part of such a drama that can ruin his reputation.

Hearing that question, Manmeet interrupts Bhairav and tells him that Rajkumar did everything because of his upbringing that taught him to help women in need.

After hearing Manmeet’s explanation, Bhairav feels bad about beating up Raj while Manmeet leaves after apologizing to everyone again.

Meanwhile, Puneet calls Vidya and gets to know that Manmeet has gone to Raj’s house and tries to convince Ajeet that there is something going on between the two.

Ajeet does not seem convinced and asks Puneet not to raise any questions about Manmeet and Raj.

Later, both Manmeet and Raj remember their moments spent together in Shimla and dive into deep thought about the new feeling arising in their hearts.

Bhairav comes to talk with Raj and apologizes for beating him as he got scared that Raj did something big without telling him.

Raj and Bhairav succeed in making up for each other while Bhairav applies medicine to Raj’s wound.

Raj notices a toy inside his bag which he recognizes as Anmol’s and appears at Manmeet’s house to return it.

Manmeet thanks Raj for coming there at the right time and welcomes him inside to have a quick chat.

After Raj assures Manmeet that everything is fine in his house, Manmeet asks him for coffee and goes to the kitchen to prepare it.

As Manmeet returns with the coffee, she spots Rajkumar sleeping on the couch on the balcony.

Deciding not to wake him up, Manmeet puts a blanket on Raj while he is asleep and watches him from a distance with a smile on her face.

© Copyright tellybest.com, 2022, 2023. All Rights Reserved. Unauthorized use and/or duplication of any material from tellybest.com without written permission is strictly prohibited.
Cached Saved on: Monday 21st of November 2022 03:38:44 AMCached Disp on: Saturday 10th of December 2022 01:36:48 PM