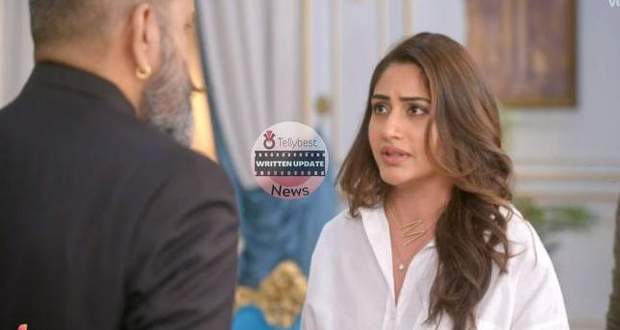 Today's Sherdil Shergill 19th October 2022 episode starts with Rajkumar waking up from his sleep and noticing Manmeet sleeping on the sofa.

Rajkumar decides not to disturb Manmeet and leaves after wrapping the blanket around him.

Meanwhile, Nirali and Choti wait for Raj to return while suspecting that something is not right about the current situation.

Rajkumar returns and gets shocked to see both his mother and sister waiting for him.

Nirali asks Rajkumar where he has been and he tells them that he went to drink coffee with his friends.

However, Choti doubts something is not right and tries to interrogate Raj but he successfully throws her out of the room.

After Rajkumar lies down on his bed to sleep, he receives a message from Nikki, saying that even though he has blocked her number, she will not let him escape.

Rajkumar gets scared and thinks about he can be free from Nikki’s continuous threats.

The next day, Manmeet joins the office as usual and gets shocked to see Rajkumar waiting for her in her cabin.

While Manmeet and Raj discuss things, Mishra Ji stares at them with suspicious eyes.

Manmeet intentionally tells Rajkumar to attend to the new client with her in front of everyone so that no one gets any wrong idea.

Nirali calls Rajkumar and asks him to come back home by 5 pm as they have called a marriage proposal to their house.

Rajkumar gets nervous upon hearing that but Nirali does not listen to him.

Later, Nikki approaches Radhe as Komal and tries to find out about the whole Yadav family.

Manmeet warns Raj that Nikki is not a woman who will stay silent but Rajkumar laughs off her words.

Later, Vidya calls Manmeet and asks her to come home urgently as something happened to Anmol.

Manmeet informs Rajkumar about Anmol and asks him to reach home as soon as possible.

After reaching home, Manmeet and Rajkumar learn that Anmol has inhaled a pea while playing with it.

Rajkumar welcomes his family doctor who takes out the pea from Anmol’s nose while Manmeet holds onto Raj for emotional support.

The doctor tells Rajkumar that he was unaware of his marriage to which Raj gives an awkward laugh and says that he and Manmeet are not married.

On the other hand, Bhairav and the entire family wait for Raj to come home as the girl's family has come to meet them but Rajkumar does not show up.

© Copyright tellybest.com, 2022, 2023. All Rights Reserved. Unauthorized use and/or duplication of any material from tellybest.com without written permission is strictly prohibited.
Cached Saved on: Monday 21st of November 2022 12:52:48 AMCached Disp on: Thursday 1st of December 2022 01:25:13 AM