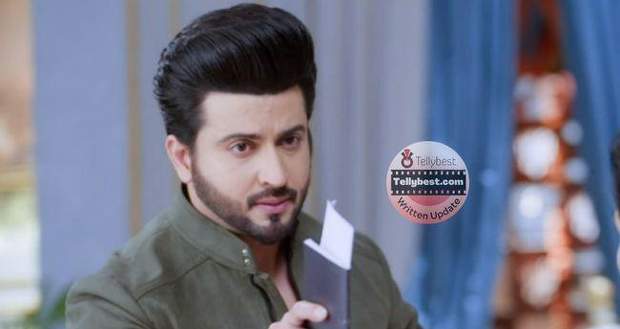 Today's Sherdil Shergill 1st December 2022 episode starts with Nirali asking Bhairav how they will change Rajkumar's mind about not having any child after marrying Manmeet.

Bhairav says that the decision to marry Manmeet is Rajkumar's but the final blow of their separation will be staged by him.

While Nirali gets confused after hearing Bhairav's statement, he calls Ajeet and informs him about his decision to let Rajkumar marry Manmeet.

Further, Bhairav informs Ajit that they will be coming to the house the next day with the "Shagun" being the groom's family.

Ajeet gets shocked to hear such news and questions Puneet about Bhairav's intentions.

Just then, Manmeet enters the house and informs Ajeet and Puneet about Bhairav having a heart attack after hearing Rajkumar's request to marry her.

Ajeet and Puneet get shocked to hear about Bhairav's condition while Ajeet suspects Bhairav's health.

As Manmeet reveals that Bhairav wants her and Rajkumar to get married in the next 2 to 3 days, Ajeet gets angry at Bhairav's condition.

Manmeet assures Ajeet that she is fine marrying Rajkumar in such a short time and has no problem with his family.

Giving Ajeet a hug, Manmeet convinces him by saying that she will make her place in the same way she won in the field of architecture.

Manmeet says that her parents are her strength and with them by her side, she can do anything for her dreams.

The next day, Nirali and Pankhudi arrange the gifts together with gloomy faces while Choti conspires about some plan with her husband so that they can stop Raj's wedding.

Pankhudi complains that she has no heart to decorate gifts for Manmeet for whom Murari is in jail.

Meanwhile, Bhairav comes to meet Murari and asks him to keep the fire in his heart burning so that he can take revenge on her when the time comes.

Bhairav informs Murari that he has made arrangements for Murari to get out of there soon.

Nirali stops Rajkumar from leaving the house but he secretly reaches Manmeet's house as a delivery boy.

Rajkumar listens to Manmeet talking about him to Anmol and surprises Manmeet by coming to her room.

Manmeet drags Rajkumar along with her outside which opens the jaws of everyone from both Manmeet and Rajkumar's families.

© Copyright tellybest.com, 2022, 2023. All Rights Reserved. Unauthorized use and/or duplication of any material from tellybest.com without written permission is strictly prohibited.
Cached Saved on: Thursday 26th of January 2023 06:43:08 PMCached Disp on: Monday 6th of February 2023 02:46:33 AM