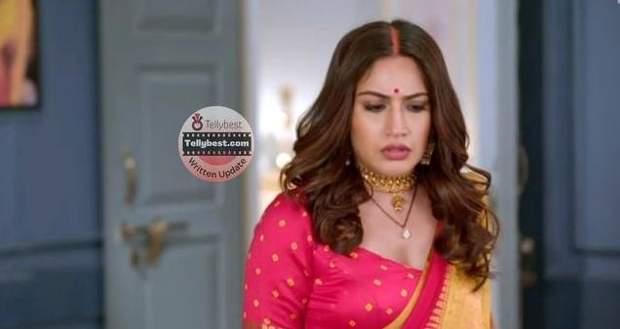 She says that the people who came as guests started asking questions about Anmol which she was unable to answer and Manmeet hears her.

Manmeet tries to defend herself by saying that she should be there when someone is discussing her but Bairav and Pankhudi dismiss her words and Pankhudi tries to get Raj’s attention on Nirali.

Further, she says things can be sorted out by talking and Bhairav butts in and says that Manmeet slapped Nirali to quiet her down but Manmeet denies this.

Nirali then acts more and says that she is a liar as well.

Seeing Nirali like that Raj ferociously tells Manmeet to go back to his room.

On the other hand at the Shergill house, Puneet asks Vidya about Anmol and she tells Puneet that Anmol won’t be coming back here for some time.

At the same time, Gunjan comes and she tells she was out shopping but didn’t find anything worth buying, Gunjan’s mother-in-law enters the hall and tells Gunjan to help her.

Puneet stops them and she questions Gunjan’s mother-in-law as to who gave her permission to interfere in Shergil’s family matters.

Hearing this Gunjan’s mother-in-law starts spouting nonsense and she says that if she wasn’t living here she would have said some very hurtful things.

Gunjan’s mother-in-law grabs Gunjan’s hand and storms to her room to pack her stuff.

Later, at the Yadav’s, Manmeet thinks about what happened and Raj asks her about Anmol and Manmeet’s dinner but Manmeet tells him that she is upset about the way he talked to her before.

Raj apologizes and asks for the truth and as she starts to tell it Pankhudi comes in and asks Raj to have dinner with Nirali as she won’t eat.

On the other hand, Gunjan’s mother-in-law threatens Gunjan and hurts her, and finally tells her that she has to stay here till she gets 2 cr.

Meanwhile, Bhairav instigates Raj more and gets happy when Raj makes a plate of food for Nirali and goes to Nirali’s room.

In Nirali’s room, Raj tries to make Nirali eat her food and she acts more but finally eats and leaves to eat with Manmeet.

In Raj’s room, Manmeet tries to act asleep and seeing this Raj goes into the garden to sleep.

Later, Manmeet goes to see where Raj is and she puts covers on him so that he doesn’t get cold and Bhairav sees all this from a corner.

Later, Bhairav instigates Raj further and tells him to take Nirali to the doctor first and then go for Pagphera.