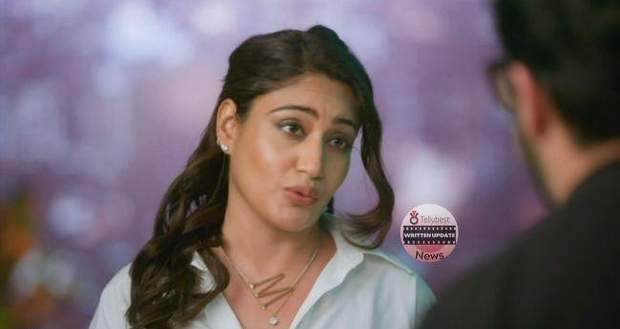 Today's Sherdil Shergill 20th October 2022 episode starts with Rajkumar sending away the doctor from Manmeet’s house and trying to explain to Menmeet his reason to call Anmol his son.

Manmeet does not mind Raj’s small lie as he helped a lot in Anmol’s situation.

Meanwhile, Bhairav and Nirali get furious as Rajkumar does not show up at the family meeting where the girl’s family came.

Bhairav asks Nirali not to speak with Rajkumar until he queues and thinks about how he should deal with Raj.

Later, at night, Rajkumar comes to his house and gets a call from Ajeet and Puneet while Nirali hears everything from outside his room.

Ajeet and Puneet thank Rajkumar for his help in Anmol’s situation and tell him how they already miss him.

Puneet even says that what Rajkumar did today was something that only a dad does for his son and she views the truth differently.

Nirali hears up to this point and tells Bhairav about what she heard.

Bhairav does not seem impressed and asks Nirali not to arrive at any conclusion as the truth is what Manmeet told them the other day.

The next day, Rajkumar comes to Nirali and Bhairav and apologizes for being absent earlier.

Choti tries to instigate Bhairav against Raj by asking where he had gone when everyone was waiting for him.

Rajkumar explains to them that Anmol had an emergency situation that kept him occupied.

After Nirali doubts Raj’s relationship with Manmeet, he assures her that there is nothing between him and her.

Later, at the office, Nikki calls Rajkumar through Mishra Ji’s mobile and asks him to come to Sky City in 30 minutes or else she will jump off from there.

Rajkumar informs Manmeet about Nikki’s situation and asks her to lie to Nikki about them being married just as they did in Shimla.

At first, Manmeet refuses Raj but then agrees to help him as Sky City is important to her and she has to repay Raj.

After arriving at the rooftop, Manmeet tells Nikki that if Raj goes to jail due to her suicide, then she and Anmol will be left alone.

Manmeet reveals that she and Rajkumar are married to each other with Anmol as their son which shocks Nikki.

As Nikki questions Manmeet about how she met Rajkumar, Manmeet says that they met each other at seminar years back and fell in love at first sight.

Manmeet tells Nikki that even before they were married, she was pregnant with Anmol.