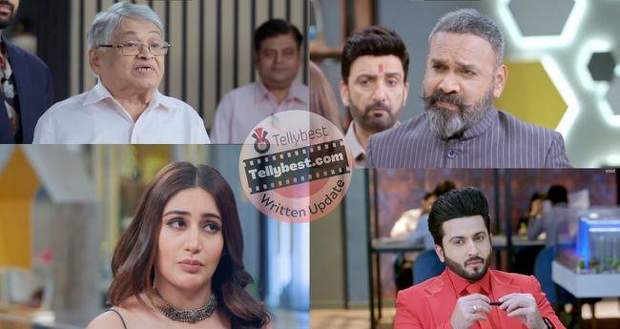 Today's Sherdil Shergill 21st November 2022 episode starts with Ajeet trying to defend Manmeet from the police and says that the builders are the ones who should be arrested not the architect.

The officers don’t listen to any word Ajeet says and drag Manmeet outside.

Manmeet pleads to the officer to let her see her baby one last time and after a lot of pleading Manmeet is allowed to go inside.

Manmeet hugs Anmol and tells him to stay strong, Anmol senses something and starts to cry.

Ajeet and Puneet rush in and hug Manmeet while Manmeet assures them that she will be fine and be back soon.

Outside the press reports the whole scene which the Yadav family (Priyanka, Bhairav and Murari) watches and enjoys.

Nirali comes in and asks Bhairav with concern that will he be in any kind of danger.

At the same time, Puneet forces her way inside the Yadav house and goes straight to Raj’s room.

Rajkumar is shocked to see Puneet and asks her if everything is alright or not.

Puneet in huffed voice asks Raj how he could abandon Manmeet over a small argument.

Raj gets confused and asks Puneet with a worried look as to what had happened that Puneet was in such a condition.

Puneet tells Raj that Manmeet has been arrested and everyone is blaming her for the sky city incident.

The entire Yadav family enters Raj’s room, Puneet turns to Bhairav and pleads that Manmeet is an honest worker and she would never put anyone in jeopardy.

Raj still in confusion asks why was he not informed about this before when Priyanka hands Raj her phone where he watches the news.

Raj goes to the police station and everyone except Nirali leaves. Puneet falls down and Nirali tries to calm her.

Bhairav enjoys and praises his daughters and decides to go and watch how Manmeet falls into his trap.

At the police station, Husain and Ajeet cross-question the officer.

The police officer is highly aggravated by the questions and Manmeet is dragged to be taken to an interrogation cell.

Raj enters the station and stops Manmeet and tells her that he won’t let anything happen to her.

Manmeet is relieved to see him and she recalls all the time spent with Rajkumar.

The inspector interrupts and tells the officer to take Manmeet to the interrogation room but Ajeet says that as Manmeet's lawyer he will go with her.

Then Rajveer Kapoor city's best lawyer comes in and tells everyone that Manmeet will not be able to get bail and that he is going to fight the case against Manmeet.

On the other hand, Manmeet is given a bad lawyer by Bhairav.

Manmeet is taken to the cell and the inspector misbehaves with Manmeet.

Manmeet stands up for herself and questions the inspector.