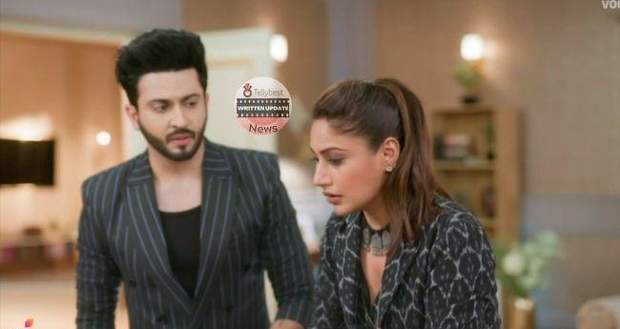 Today's Sherdil Shergill 21st October 2022 episode starts with Manmeet convincing Nikki that she and Rajkumar are a married couple and sending her off from there.

Rajkumar compliments Manmeet’s impeccable acting and asks her to become an actor instead of her current profession.

Manmeet makes it clear that none of them will ask for help from each other from now on and their deal comes to an end.

Raj agrees to the condition and asks Manmeet to attend his act that night at the club because he will put up a special performance.

Later, at night, Manmeet attends Rajkumar’s performance at the bar while Nikki crashes at the Yadav household in a drunk state.

Nikki causes a scene in front of the whole family and reveals that she is Rajkumar’s girlfriend whom he betrayed with Manmeet.

Bhairav asks Nikki what she is talking about after which she shows everyone a video of Manmeet confessing that she and Rajkumar love each other and are married.

Everyone in the family watches the video with open mouths while Bhairav and Nirali facepalm with disappointment.

Meanwhile, Raj makes jokes about his breakup, at which everyone laughs exclusively, including Manmeet.

Nikki falls unconscious after causing a ruckus about how she wanted to marry Raj and rule over Sky City.

Bhairav asks Radhe to lay Nikki in the guest room until she wakes up and warns everyone not to tell Rajkumar anything about this.

On the other hand, Rajkumar proposes to Manmeet to have dinner together to which Manmeet replies that they can go to her house and eat together.

Rajkumar goes with Manmeet to her house having great expectations but ends up getting noodles as dinner.

Manmeet says that if he is unsatisfied then she can eat it instead of him but Raj refuses to hand it over.

As Manmeet drinks juice while standing, Rajkumar’s eyes fall on her making him freeze in his place.

Raj stares at Manmeet as her lips touch the bottle and the juice slides down her throat while the noodles hang in the air from his mouth.

Manmeet wakes up Rajkumar from his imagination and he leaves there for his home.

Later, Rajkumar drinks in his room to celebrate his breakup and sees Manmeet coming to him with her special noodles.

Raj calls her Mannu which makes Manmeet blush hard as she sits beside him.

As Rajkumar asks Manmeet how she got there, Manmeet gets up and sensually dances to the song “Saat Samundaar Par” while Raj drools over her.

At the same time, Nirali loses consciousness due to tension and Bhairav gets to know about Raj calling the doctor for his son.

Raj tells his "Mannu" that he is ready to take care of Anmol and will set up a bed for him in the room.

As Manmeet asks about herself, Rajkumar begins to think while Manmeet suggests that he should marry her.

Hearing that, Rajkumar goes stiff and Manmeet suddenly appears in a jumpsuit with a whip in her hand.

Grabbing his collar, Manmeet tells Raj that he has to marry her if he wants her to live with him.

Raj shivers in fear as Manmeet lashes her whip around him but disappears when he pinches himself to wake up.

The next day, Bhairav asks Nikki to return to her hometown after he hands over money to her and calls Ajeet.

Bhairav asks Ajeet and Puneet to come to Mumbai without informing Manmeet.

© Copyright tellybest.com, 2022, 2023. All Rights Reserved. Unauthorized use and/or duplication of any material from tellybest.com without written permission is strictly prohibited.
Cached Saved on: Monday 21st of November 2022 12:48:23 AMCached Disp on: Wednesday 7th of December 2022 11:36:18 AM