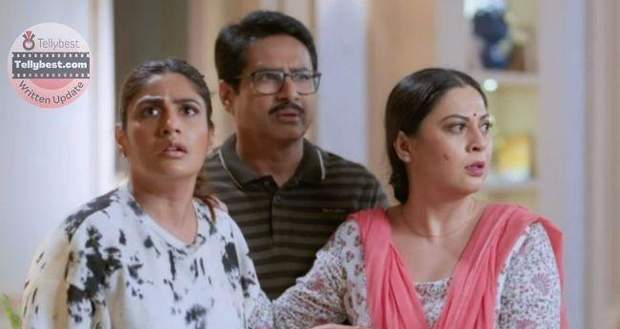 Today's Sherdil Shergill 22nd November 2022 episode starts with Rajkumar deciding to call Bhairav again to send some help so that they can take Manmeet out of the jail soon.

Hussain says that he thinks that Bhairav has some connection with Manmeet getting arrested which infuriates Raj.

Raj grabs Hussain’s collar and asks him not to speak ill about his father but Hussain asks Raj to connect the dots himself.

Meanwhile, the policewoman lands a slap on Manmeet’s face as she asks her for whom she is working.

Manmeet falls to the ground after crashing into the earthen pot containing water and cuts her arm with a loud noise.

Raj comes rushing hearing the noise and gets shocked to see Manmeet lying on the floor with blood dripping from her arm.

Raj gets into the cell and holds Manmeet in his arms while asking the police to provide first aid for her injury.

After tying up her wound with a bandage, Rajkumar says that he is taking Manmeet to the doctor and warns the policewoman about her abusive interrogation.

The police suggest that they bring the doctor in there and refuse Raj to take Manmeet with him.

Raj assures Manmeet that he will come soon to take her with him and asks her to take care of herself in the meantime while hugging her.

Later, the policewoman talks with Bhairav and tells him that it is getting difficult for her to hold things off as everyone is educated on Manmeet’s side.

Bhairav tells the policewoman to let Manmeet get attacked by the other jail mates so that she learns a lesson.

Bhairav swears to make Manmeet suffer until her ego shatters and she comes crawling to him asking for forgiveness.

At night, Manmeet gets attacked by two women who beat her up and try to choke her but get stopped by the police.

Rajkumar gets to know about the attack the next day and asks the policewoman about the people who beat Manmeet up.

Seeing that the policewoman does not answer his questions, Raj causes a ruckus outside the police station with his car and gets arrested.

Raj gets to see Manmeet again after going to the next cell to Manmeet’s and tries to make her laugh by cracking jokes.

The police give Manmeet the food sent by her family which she and Rajkumar share together while being locked up in jail.

© Copyright tellybest.com, 2022, 2023. All Rights Reserved. Unauthorized use and/or duplication of any material from tellybest.com without written permission is strictly prohibited.
Cached Saved on: Tuesday 22nd of November 2022 12:51:11 AMCached Disp on: Monday 5th of December 2022 12:10:50 AM