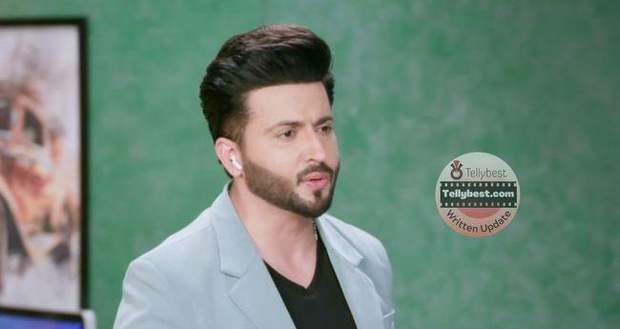 Today's Sherdil Shergill 23rd December 2022 episode starts with Manmeet telling Raj that he should’ve listened to her yesterday and now she is in no mood to talk to him.

Manmeet abruptly cuts the call and Raj tenses, seeing Raj in such a situation Husain gives him a piece of advice that he should put extra effort to make up to Manmeet.

In the Yadav house, Brijesh tells Radhe all that happened and Radhe immediately calls Raj and tells him about Nirali’s acting to fall down.

In the Shergil house, Manmeet tells Puneet that she is scared to go back to the Yadav house because no one is on her side and she doesn’t want to go out fighting with everyone for the rest of her life.

At the same time, Raj rings the doorbell and comes to see that Puneet and Manmeet are sitting together.

Puneet makes an excuse and leaves Raj and Manmeet alone so that they can talk things out.

Then Raj sits next to Manmeet but she moves away so he goes and sits on her lap and moves her hands to hold him.

Raj pulls Manmeet’s chin up and looks into her eyes and apologizes for not coming earlier.

Manmeet shrugs at him but he holds on tightly and says that he should have listened to her and he is sorry.

Hearing all this Manmeet says that she wants him to give her a fair chance just like he gave her mother and sister.

Further, when Raj says that he is here to take Manmeet home with him she says that she is not weak and within these few months she has only grown stronger but the Yadav family is not ready to accept her as their son’s wife.

Hearing this Raj tries to tell her that he is on her side and wants her to be happy and assures her that such a thing will not happen again.

Manmeet tells him that without knowing anything Raj thought that she would raise her hand on Nirali so how can she expect the Yadav family to accept her and live in a house like this?

Hearing this Raj storms to the Yadav house where Bhairav tells Nirali that she made a terrible mistake.

Raj enters Bhairav’s room and declares that he, his wife, and his son will not live with them anymore. Raj takes Bhairav’s blessings and leaves.

Pankhudi and Nirali try to persuade Raj but it doesn’t affect him and he walks out.

At the same time, Bhairav starts breaking stuff and dramatically tries to manipulate Raj into staying but he leaves.

Murari tells that Raj has left the house and Bhairav gets stunned, and Nirali blames Manmeet.

In the Shergil house, Puneet tells Manmeet that she is going to apologize to Gunjan’s mother-in-law.

At the same time, Raj rings the bell, walks inside, and says that he left the house so he and Manmeet won’t live in that house.

Manmeet gets shocked and asks Raj how he could do that.