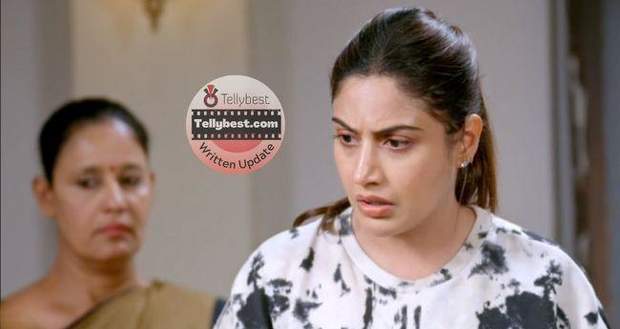 Today's Sherdil Shergill 23rd November 2022 episode starts with Manmeet and Rajkumar sharing the food that was sent from Manmeet’s house.

Manmeet asks Rajkumar how the food is to which Raj replies that it is a bit salty but will get tasty if she feeds him with her own hands.

Hearing Raj, Manmeet asks him if he is trying to flirt with her and Raj confidently replies with a yes.

Manmeet breaks out a smile and proceeds to feed Rajkumar with her own hands.

Rajkumar enjoys the food and the night passes by with Raj and Manmeet talking and bickering with each other.

The next day, Choti creates a scene after she gets to know that Raj has been arrested by the police and asks Bhairav why he is not taking him out.

Bhairav says that Rajkumar went to jail willingly as he wants to be with Manmeet.

Nirali hears the conversation and tells Bhairav that she wants her son back in the house as soon as possible.

Bhairav denies Murari from taking Raj out of jail as once he helps Raj, people will question him why he is not helping Manmeet.

At the press conference, Bhairav acts saint and announces that he believes in going according to the law and will not use any of his connections.

One of the reporters asks Bhairav why his son is locked in the cell beside Manmeet’s and whether he is the MD of the company.

Bhairav somehow dismisses the questions but fumes in anger on facing the humiliation in front of the media.

Later, both Rajkumar and Manmeet get bail but the lawyer asks Manmeet to come to the court as her case is special.

Rajkumar asks Manmeet to meet with him in her house and asks her to say “I love you” to him once.

Instead, Manmeet hugs Rajkumar tightly in her arms and gives off a warm smile that speaks more than words.

However, as Manmeet rides with the police officer and hears their conversations, she realizes that they are fake police.

The scammers stop the car in the middle of nowhere and take Manmeet into the jungle by pointing a gun at her.

While the man holds the gun at Manmeet’s head, she closes her eyes to remember Anmol and Rajkumar and attacks them to escape.

Manmeet successfully knocks out two men and calls Rajkumar with one of their phones.

Rajkumar gets shocked to hear that some goons are after Manmeet to kill her.

© Copyright tellybest.com, 2022, 2023. All Rights Reserved. Unauthorized use and/or duplication of any material from tellybest.com without written permission is strictly prohibited.
Cached Saved on: Wednesday 23rd of November 2022 11:18:37 PMCached Disp on: Wednesday 7th of December 2022 12:11:49 PM