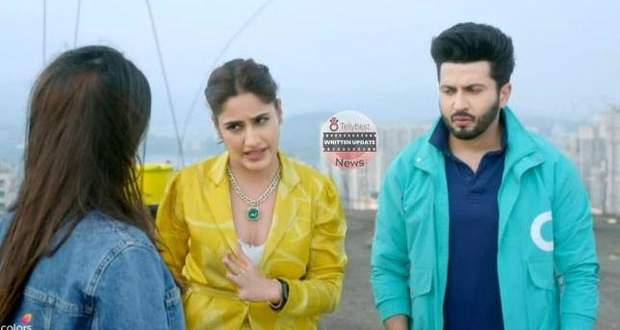 Today's Sherdil Shergill 24th October 2022 episode starts with Bhairav asking Ajeet and Puneet not to tell Manmeet about their arrival in Mumbai.

Ajeet tries to know the matter in detail but Puneet understands that the matter is about Manmeet and Rajkumar and assures Bhairav that they are coming.

The night arrives with Manmeet supervising the work at the construction site when Rajkumar comes to meet her.

Manmeet asks Rajkumar what new chaos he has created which makes him remember his dream the earlier night.

Rajkumar tells Manmeet that he came to see her because she had been missing her since the morning.

Meanwhile, Ajeet and Puneet arrive at the Yadav household and meet Bhairav and Nirali for a discussion about the matter.

Bhairav shows Ajeet and Puneet the video of Manmeet confessing that she and Rajkumar are in love with each other and are married with Anmol as their son.

Ajeet seems surprised while Puneet gets happy as she always wanted Rajkumar and Manmeet to end up together.

Puneet tells Bhairav and Nirali that Anmol is their grandson which shocks everyone.

Bhairav and Ajeet ask Nirali and Puneet to go see the house together as they need to discuss the matter in private.

Guessing the situation, Ajeet tells Bhairav that Manmeet and Rajkumar are using the lie of them being married to save each other.

Bhairav feels relieved to know Ajeet’s point and decides that they shall sit together with Rajkumar and Manmeet to extract the entire truth from them.

At the same time, Puneet shows Nirali a picture of Anmol, the same as Rajkumar’s childhood picture.

Nirali feels emotional while looking at Anmol’s picture as she has always wanted a grandson.

After a serious discussion, Ajeet and Puneet leave the house with the decision that they will have a talk with Manmeet and Rajkumar.

Meanwhile, Raj and Manmeet tear their calendars and toss them in the air to celebrate a special moment between them.

Later, Rajkumar performs his stand-up comedy at the club which offends a certain group of people.

After Raj gets out of the club, those people hit him with a wooden stick on his head and he falls to the ground.

© Copyright tellybest.com, 2022, 2023. All Rights Reserved. Unauthorized use and/or duplication of any material from tellybest.com without written permission is strictly prohibited.
Cached Saved on: Monday 21st of November 2022 05:02:27 PMCached Disp on: Sunday 4th of December 2022 11:10:26 PM