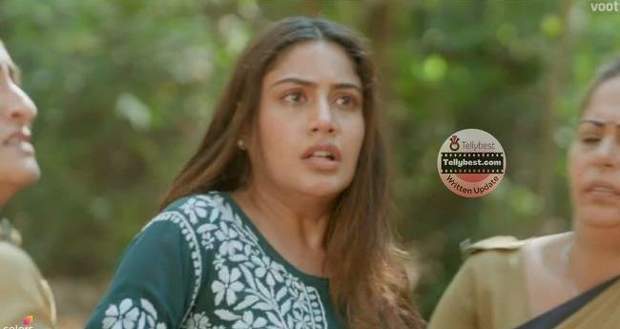 Rajkumar is covered in blood and he coughs and asks for water, Manmeet holds him worriedly and tells Raj that he will be fine because she won’t let anything happen to him and rushes to bring him water.

Manmeet storms the house looking for water, she gets frustrated very soon but finally is able to find water.

She gets him water then tries to straighten him and feeds him some water.

She tells him that she is going outside to get help as Raj has to be taken to the hospital, Raj says that it is not safe outside.

Manmeet tells Raj that she can kill anyone for him and she has no regard for her life if his life is on line.

She asks him to think about something good and to keep his eyes open, Raj clings to Manmeet and tells her while coughing that he has no memory to remember.

He asks her to make a memory that he can remember and he points out that she should kiss his cheeks before going.

Manmeet kisses his forehead and Raj remembers all the time he spends with Manmeet she hugs him.

The goons see a trail of blood and decide to follow it to find their targets.

At the same time, Manmeet begs Raj to let her go as he needs to get to the hospital. Raj tells his Jaan to tell him how she feels about him as they don’t know anything about the future.

Bhairav on the spot

Raj loses consciousness and Manmeet rushes outside and sees that Bhairav holds out a gun at Manmeet’s head and shoots.

Bhairav shoots one of the goons and rushes inside, Manmeet is in disbelief she was not shot.

Bhairav takes Raj to his own house instead of taking him to the hospital and Manmeet doesn’t leave him.

Meanwhile, at the Yadav house, Priyanka is very hostile toward Manmeet and the doctor calls Manmeet into the room where Raj was taken.

Gunjan faces her in-laws and is told to cut off her ties with her parents.

Puneet and Ajeet decide to leave this situation as it is.

At the Yadav’s, Puneet thanks Nirali for Raj and apologizes too. Puneet questions Bhairav and doesn’t seem to believe anything that comes out of Bhairav’s mouth.

Inside the room, Manmeet asks the nurse when he will get his consciousness back and she tells her that Raj will be all right and leaves the room.

Manmeet lists out complaints to Raj

Manmeet goes near Raj and hugs him, and then she tells him that she is thinking of taking his advantage while he is unconscious but suddenly jumps out of the bed.

She lists out some complaints to him. First, she tells him dramatically that the way Raj acts to be the boss it doesn’t suit him.

Second, the way Raj calls Manmeet ‘Boss’, ‘Manmeet’, ‘ jaan’, and ‘Janeman’ she used to hate it but now she loves it.

Manmeet holds Raj’s face and softly rubs and tells him that she can’t imagine her life without him and asks him to come back.

Puneet and Ajeet call Manmeet out to talk to her and leave for their house.

The whole Yadav family discusses why Manmeet in Raj’s room is and they are out in the garden, Bhairav angrily tells them to not care about Manmeet but try to find a solution to the problem.

Prianka then tells Bhairav that he should get a DNA test taken for Anmol and find out if he is really Raj’s son or not.

Husain comes to Shergil’s house with a private investigator and tells Ajeet that the whole case of Sky City was done by Murari.

Meanwhile, Raj wakes up and acts like he had forgotten who Manmeet is. Manmeet tries to clear things but he still keeps the act on and she rushes out to get the doctor.

Raj drops the act and repeats all the things Manmeet told him while he was unconscious.

Manmeet goes to beat him for acting and teasing her, but he flirts with her and calms her.

She embraces him and after a few moments feeds him soup. Raj says that he has a question to ask but Manmeet tells him not now.

Mammeet goes down on her knees and proposes to Raj, eagerly Raj says yes before letting her finish.

At the same moment, Ajeet calls Manmeet and tells her that the whole case of Sky City was a plan of Bhairav.

Ajeet tells Manmeet to come home immediately and not talk to Raj about him but Raj snatches Manmeet’s phone and sees the evidence that tells that Murari was the one who did all this.

Raj gets enraged and takes off to find answers and Manmeet tries to stop him.