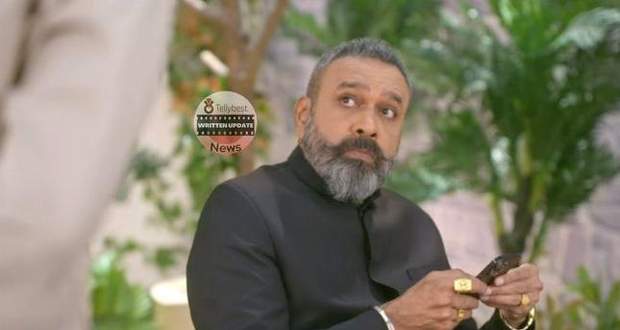 Today's Sherdil Shergill 25th October 2022 episode starts with Manmeet getting mortified to see Rajkumar falling unconscious in her arms after getting injured.

Manmeet calls her parents while Rajkumar tells her that Bhairav should not be aware of this incident before fainting.

Ajeet tries to call Bhairav but Manmeet stops him as she does not do anything to get messy.

Meanwhile, Nirali has come to believe that Anmol is Rajkumar’s son because of the similarity in their faces.

Bhairav tries to make her understand that all babies look the same but Nirali does not listen to him.

Nirali says that she will never forgive herself if Anmol turns out to be their grandson as they are not even accepting him even though he is so nearby.

Coming back to the hospital, Manmeet signs the consent form as Rajkumar’s wife so that his treatment can start.

Back at the Yadav household, everyone gets worried about Rajkumar and calls him to find out where he is.

Manmeet sends a text to Radhe saying that Rajkumar is working overtime and is busy for the latter night.

However, Bhairav suspects something wrong and sends his men to check Manmeet’s house to see if Rajkumar is there.

Ajeet and Puneet are surprised to see those buff men entering the apartment and searching for Prince.

After they leave, Ajeet calls Bhairav and tells him what is going on.

Late at night, Rajkumar regains his consciousness and tells Manmeet everything after he checks that she is real and not an illusion.

Manmeet tells Rajkumar how worried she was and falls asleep at the side of Rajkumar’s bed.

The next day, Ajeet appears at the hospital with Bhairav shocking both Manmeet and Rajkumar.

Bhairav asks Manmeet why she posed as Rajkumar and lied to the family but Rajkumar says that he requested Manmeet to do so.

Manmeet tries to explain the situation to Bhairav and apologizes to him.

However, Bhairav and Ajeet ask Manmeet and Rajkumar to prepare to answer their questions regarding everything.

© Copyright tellybest.com, 2022, 2023. All Rights Reserved. Unauthorized use and/or duplication of any material from tellybest.com without written permission is strictly prohibited.
Cached Saved on: Monday 21st of November 2022 07:52:30 AMCached Disp on: Saturday 10th of December 2022 01:35:52 PM