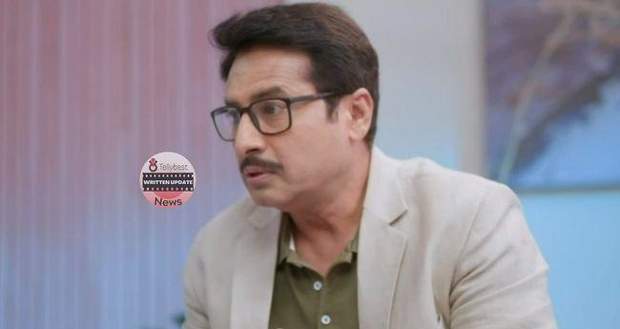 Today's Sherdil Shergill 26th October 2022 episode starts with Bhairav saying that Raj and Manmeet have many questions to answer and asks them to sit down.

Ajeet suggests waiting until they get home, but Bhairav tells him there is no need to do that.

Bhairav asks Rajkumar who beat him up, why they beat him up and what is the status of his relationship with Manmeet.

Rajkumar tells Bhairav that some goons attacked him for his money and ran away with his wallet after beating him up.

Bhairav accepts the answer and asks Manmeet to answer the truth that they are hiding their relationship.

Manmeet tells Bhairav that the truth is the same as she told him after returning to Mumbai.

Bhairav reveals the video of Manmeet and asks again to which Manmeet and Raj answer that they lied to get rid of Nikki as she was a gold digger.

After the interrogation, Bhairav takes off with Rajkumar while Manmeet and Puneet leave for their home.

Bhairav decides that Rajkumar will stop working at Manmeet’s office to which Manmeet gladly agrees.

While leaving, Rajkumar eagerly waits for Manmeet to turn to him and she does so before their car takes off.

Later, Bhairav asks Murari and his men to investigate the incident and catch the people who beat up Raj and know the reason behind their actions.

Rajkumar realizes that Murari is investigating to find out who beat him up and calls Manmeet in panic.

Meanwhile, Manmeet is at a shopping mall with Ajeet and Puneet where Choti and Nirali also visited to shop for Diwali.

Choti eavesdrops on Manmeet’s conversation while Puneet introduces Anmol to Nirali who gets emotional to see him.

Later, Bhairav and Nirali announce that Raj has to marry a girl within the next 15 days after Choti outs Raj for contacting Manmeet.

Raj calls Manmeet to ask for help but Manmeet surrenders and suggests Raj fight for himself.

Hearing that, Raj agrees to meet with the girls for marriage as his ego has gotten hurt.

Meanwhile, Bhairav finds the taxi driver in whose car Raj went to Manmeet’s residence and asks him to show them the place Raj took the taxi.

Puneet gets upset after hearing that Raj is going to marry within the next 15 days and worries about how Manmeet and he will get together.