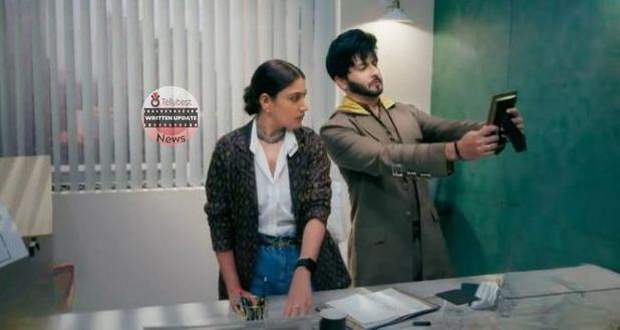 Today's Sherdil Shergill 26th September 2022 episode starts with a voice introducing Rajkumar Sherdil Yadav who left his village and went to Mumbai and became a famous architect in Mumbai and says this is the story of Manmeet Shergill.

Meanwhile, Gunjan is getting ready and her mother advises her to get ready in traditional clothes as she is getting married in 15 days.

A car honks, Gunjan and her father enter and meet Gunjan’s in-laws who show them a picture of Manmeet in a magazine and request Gunjan’s mother to call Gunjan’s elder sister (Manmeet).

However, he informs Gunjan’s in-laws that Manmeet might not come to Gunjan’s marriage as they are not on good terms but Gunjan forces Manmeet’s mother to call Manmeet.

On the other hand, Manmeet is getting her and Anmol's (her baby) passport-size photo clicked by the photographer recommended by Rajkumar.

Later, Manmeet enrolls Anmol in school and the principal taunts her for being Anmol’s father and mother.

After leaving Anmol to his caretaker, Vidya, Manmeet gets emotional and goes inside the office.

Meanwhile, a manager informs Manmeet about Rajkumar messing up with a project and shows her a legal notice.

At the same time, Hussain enters the office and Manmeet requests him to kick out Rajkumar as she cannot endure his mishaps anymore.

Hussain reminds Manmeet that more than half of their finances are managed by Rajkumar’s father and she has to bear him until his internship ends there.

Looking at her dream project of building a skyscraper with 140 floors, Manmeet gets silent and returns to her cabin where she gets messages about some emergency in her family.

Manmeet makes Shraddha call her house and talk to her mother asking her what the matter is.

Manmeet’s mother gives her the good news of Gunjan getting married soon and tells her that her father will call her soon to invite her to the wedding.

Hearing that, Manmeet gets overwhelmed with emotions as she has not talked with her father in the last 2 years.

After hanging up, Manmeet expresses her happiness to Shraddha and says that her dream of a complete family is not far away.

Manmeet remembers her father telling her that architecture is a male-dominated field and she will get crushed soon which makes her proud of her achievements.

When Balrao asks Manmeet and Hussain about the condition of Rajkumar in the company, Manmeet utters the truth about him being a terrible employee.

Later, Manmeet takes Anmol and goes on a drive and shares her whole day with her son with the hope of reuniting with her family.

After returning, Manmeet learns that some guest has arrived at her home and enters her house to check.

On entering the washroom, Manmeet gets stunned to see Rajkumar doing his business there with a coke in his hand.

Manmeet gets furious at Vidya who allowed Rajkumar to enter while Rajkumar comes out of the washroom with his "heroic" avatar.

© Copyright tellybest.com, 2022, 2023. All Rights Reserved. Unauthorized use and/or duplication of any material from tellybest.com without written permission is strictly prohibited.
Cached Saved on: Monday 21st of November 2022 07:12:29 AMCached Disp on: Wednesday 7th of December 2022 03:35:35 PM