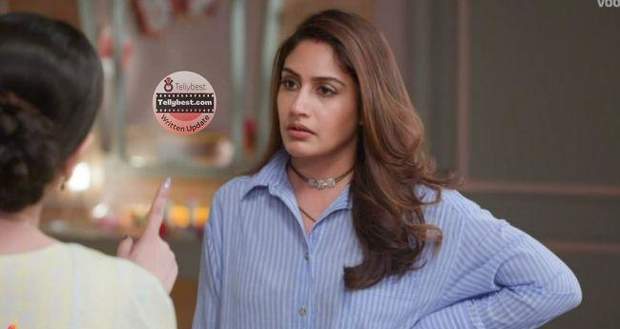 Today's Sherdil Shergill 27th December 2022 episode starts with Manmeet trying to tell Raj that this is not what she wants and he shouldn’t have left his house.

At the same time, Gunjan’s mother-in-law hears them and Raj says they should talk privately.

In Gunjan’s room, Gunjan’s mother-in-law tells Gunjan that she will not be allowed back home if she can’t get the 2 cr from Raj.

In Manmeet’s room, Raj tells Manmeet that his mother and sister will keep plotting these strategies and make a nuisance in their married life and the final result will be their separation.

Hearing this Manmeet says that this is not what she and Anmol want. This will make her look like a housebreaker and the family will blame her for it.

Raj tries to calm her and tells her that he is not breaking the bonds just that he will not live with them as it is his responsibility to keep Manmeet happy.

Manmeet turns to Puneet for help but Puneet sides with Raj.

In the Yadav house, Bhairav asks Murari about Raj and he gets tensed after knowing that Raj is staying at Shergil’s house.

In Shergil's house, Raj remembers his conversation with Bhairav and drinks coffee calmly.

On the other hand, Nirali and Pankhudi bad-mouth Manmeet and blame everything on her.

Back at the Shergil’s, Puneet asks Raj his favorite dishes so that she can make dinner and Raj informs Puneet that he will leave the Shergil house and find a new apartment for himself, Manmeet, and Anmol.

Further, he asks Puneet to let him cook for his wife.

Meanwhile, at Yadav’s, Bhairav gives Nirali an ultimatum that she has to apologize to Raj and Manmeet and until they are back Bhairav will not talk to Nirali.

At the same time, Raj romantically puts Manmeet on the kitchen slab and tells her that now he will spend some quality time with his wife.

Manmeet blushes and asks what will Puneet say and Raj assures her that Puneet has given him permission.

Raj goes away and wears an apron and Manmeet gets frustrated and orders Raj to make the noodles just the way she likes.

So, Raj and Manmeet start preparing noodles dancing and singing together and finally prepare the noodles.

They get a little too romantic but the doorbell rings interrupting their kiss.

To Manmeet’s surprise, Nirali and Pankhudi arrive at their house, and as they enter Raj presents the noodles which shock Nirali.

Nirali apologizes and holds her ears saying that she is sorry and Manmeet tries to tell her that Raj will return to the Yadav house.

Hearing this Raj interrupts and tells them that it was his idea of leaving and he is standing by it.