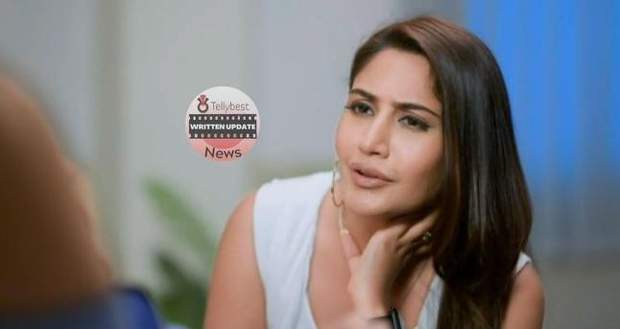 Today's Sherdil Shergill 27th October 2022 episode starts with Rajkumar surprising Manmeet by coming to the office and telling her that he is there to collect his things from the office.

Mishra Ji interrupts them by saying that Rajkumar does not have anything in the office except for a pen and some paper.

After Manmeet asks Rajkumar to reveal his true intention behind coming to the office, he says that he has great news to share with her.

Rajkumar opens his jacket and reveals his shirt with “Rajkumar Ka Swayamvar” written on it which shocks Manmeet and Hussain.

Rajkumar sarcastically says that he is going to have his marriage by arranging a swayamvar for which girls are fighting already.

However, Manmeet straightaway ignores Rajkumar and goes to the conference room where Rajkumar surrounds her in private.

Rajkumar asks Manmeet why her behavior changed so drastically as she is not even bothered by the news that Bhairav is making Raj marry a girl in 15 days.

Manmeet says that she was always such a person and does not want to interfere with Raj anymore.

Rajkumar tries to talk more but the employees enter and Manmeet gets busy with the meeting.

After the meeting, Rajkumar takes Manmeet to a silent place to talk with her and tells Manmeet that he thought that they were close friends.

Manmeet says that everything started from the moment she asked Raj to become her fake husband which she deeply regrets.

As Rajkumar gets angry on hearing Manmeet, Manmeet asks him if he is in love with her which shocks Raj.

Raj tells Manmeet that he always thinks about her, and his eyes always search for Manmeet’s smile, and he gets jealous when she smiles at another person.

Raj says that Manmeet wants to hear these things from him but sadly everything does not revolve around her.

Ending his friendship with Manmeet, Raj bids goodbye and wishes that they never would have to get entangled with each other again.

Both Manmeet and Raj think about their conversation as Raj’s words continuously play in Manmeet’s mind.

Later, Raj announces that he will not select girls but is ready to marry whomever Bhairav and Nirali will choose for him.

The next day, on Diwali, Manmeet enjoys her festival with Ajeet, Puneet, and Anmol but Raj’s thought does not leave her mind.

Bhairav and Nirali introduce Anisha as Raj’s fiancé and let them talk to each other.

Anisha turns out to be an open-minded girl and quickly gets comfortable with Rajkumar as they start talking.

As Rajkumar asks Anisha if she is ready to marry him, Anisha agrees as she thinks Raj is of her type.

Rajkumar asks Anisha if she wants to come somewhere with him and takes her to Manmeet’s house.

Manmeet opens the door for them and gets shocked as Rajkumar introduces Anisha as his to-be wife.

© Copyright tellybest.com, 2022, 2023. All Rights Reserved. Unauthorized use and/or duplication of any material from tellybest.com without written permission is strictly prohibited.
Cached Saved on: Monday 21st of November 2022 01:10:36 AMCached Disp on: Sunday 4th of December 2022 11:18:12 PM