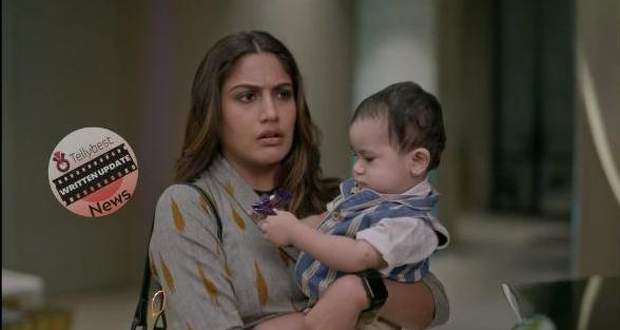 Today's Sherdil Shergill 27th September 2022 episode starts with Rajkumar coming out of the washroom while Manmeet is busy scolding Vidya on the other side.

Rajkumar tries to joke but Manmeet gets angry at him and sends Vidhya away and asks him about his unannounced arrival.

Rajkumar asks Manmeet why she told his father about him being a "stupid, useless, and unfulfilling" employee at the office.

Manmeet jokes saying that Mr. Yadav heard her internal thoughts while Rajkumar says he never angers his father and her act made her grandfather-aged father angry at him.

Manmeet tells him that he's using nepotism to get into her company which she won't let slide past her.

Further, Manmeet gets a little serious and tells Rajkumar that her father also didn't support her dream of becoming an architect but she went against him and joined the same company as a trainee where she stands as the CEO right now.

Manmeet tells Rajkumar that he cannot impress her as he is just a line on the calendar for her when he suddenly pulls out a page from his pocket with the dates of the months on it and lines stretched across the dates.

Rajkumar tells her that they are the same and states, he will fix all the problems he created within 24 hours if she doesn't call Mr. Yadav anymore.

Manmeet agrees with the condition that he should not barge into her house anymore.

Rajkumar laughs as he tells her that his father is the owner of the whole building while she is just renting a small part of it.

As Rajkumar leaves, Manmeet gets a call from her father.

Manmeet gets emotional as he tells her that her younger sister, Gunjan is getting married and that the family would like it if Manmeet joins the wedding too.

Manmeet gets excited and starts talking about Anmol and how their eyes resemble each other.

Manmeet's father stops her and tells her that only she is invited and not that vile thing.

Tears flow from Manmeet's eyes as she tells her father that Anmol is her blood while her father counters back asking who is the father of the child.

Manmeet tells her father emotionally that she waited to hear his voice for two years but if she knew he is going to react like this, she would have never waited.

Manmeet disconnects the call and lays beside Anmol while trying to stop the tears from her eyes.

The next morning, Manmeet wakes up as she recalls a memory with her family where she convinced her father to let her make her career first and then talk about marriage.

How at the age of 28, Manmeet agreed to her marriage with Abhishek but stopped when he told her that he got a transfer to Dubai and wants her to leave her job and join him in Dubai.

She remembers how her father got angry thinking that she wants to ruin the family's reputation and accused her of being greedy.

The argument only grew between Manmeet and her father as he told her that she will get used to being lonely and will die alone without a child or a partner.

Back in the present, Manmeet worries as Vidhya still hasn't arrived and the client for the meeting is at the office.

Manmeet again gets a flashback of how she told the family that she has decided to give birth to a baby through IVF as she doesn't want to die alone like her father said.

© Copyright tellybest.com, 2022, 2023. All Rights Reserved. Unauthorized use and/or duplication of any material from tellybest.com without written permission is strictly prohibited.
Cached Saved on: Monday 21st of November 2022 07:43:12 AMCached Disp on: Wednesday 7th of December 2022 12:13:06 PM