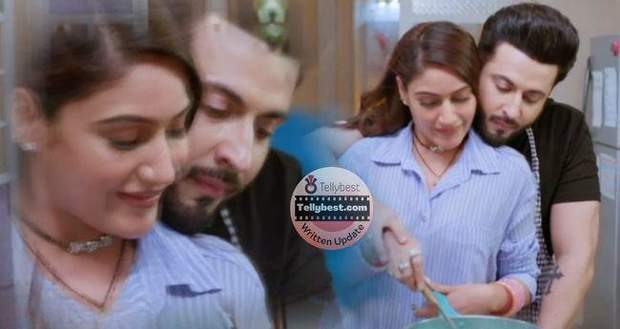 Today's Sherdil Shergill 28th December 2022 episode starts with Manmeet telling Nirali that they will return to the Yadav house.

Raj butts in and says that he took this decision after considering the whole situation and Manmeet cuts his words by saying that he took the decision on a whim and did not consider the effect on his family at all.

She turns to Nirali and tells Nirali that she will bring Raj and Anmol to their home.

Apologetically, Nirali turns to Puneet and says that Manmeet has agreed but her one and only son Raj is still angry with her.

Emphatically, Puneet tries to tell Nirali that Raj will understand and return.

Furthermore, Nirali lies that Bhairav will cut all ties with her if Raj doesn’t return with Manmeet and Anmol so what purpose is left for Nirali to live?

Hearing this Raj and Manmeet’s faces are filled with shock and Manmeet tells Nirali that they will return home right away.

Later, in the Yadav house, Manmeet, Raj, Anmol, Nirali, and Pankhudi enter but Bhairav stops them and calls Nirali and Pankhudi inside.

Bhairav points out that the ritual of Ghrah Prevesh was skipped after the wedding and in recent events, it is necessary to conduct this so as the Pandit Ji instructs Manmeet has to follow.

Hearing this Manmeet whispers into Raj’s ears and asks him if this is another drama and Raj shrugs his shoulders indicating that he is as clueless as her.

As Pandit Ji instructs, Manmeet does the ritual.

Afterward, Bhairav gives Anmol a homecoming gift and tells Raj and Manmeet that he is a strong man who isn’t afraid of anything but when Raj left the house, Bhairav felt like his whole world crumbled.

Bhairav holds his hands in front of Manmeet and apologizes for Nirali and Manmeet tells him that she knows that this family will take time to adjust.

Further, she says that she wishes to bury this hatched and move on with her life and she even promises that Raj will stay in the Yadav house only.

In Raj’s room, Raj pouts and says to Manmeet that he is angry with her and she has to persuade him.

So Manmeet sits on Raj’s lap and asks him why is he angry.

Innocently, Raj blabs that Manmeet overlooked his decision completely and made promises to everyone and now if anything happens he will not take her side.

Meanwhile, in Bhairav’s room, Nirali blabbers to Pankhudi that she is upset with Bhairav and she feels humiliated.

Pankhudi tries to calm her mother but Nirali makes up her mind that she will humiliate Manmeet.

Back in Raj’s room, Manmeet tells Raj that she had no one in her life to rely on but now she has her husband.

Hearing this Raj gets happy and reaches out to kiss her but Manmeet stops him and he says that he is ordering Chinese and he wasn’t doing anything.

Later, in Bhairav’s room, Nirali questions Bhairav’s intentions and he tells her that to keep Raj he will go to any lengths.

Nirali thinks that she will go to any lengths to get Manmeet out of Raj’s life.

The next morning, Murari and Nirali come up with a plan to humiliate Manmeet by saying loudly that there needs to be a pooja.

Manmeet overhears this and tells them that she is interested in this pooja.