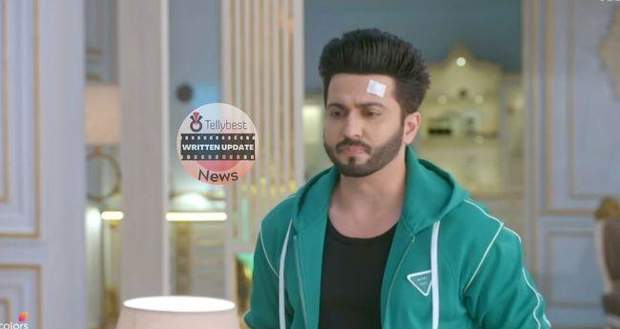 Rajkumar says they came to see the top floor and plan to move there after marriage.

Further, Rajkumar asks Manmeet to come to their engagement which will be held after a few days along with Ajeet and Puneet.

As Rajkumar proceeds to leave with Anisha, Manmeet stops them and asks them to come inside and have a talk.

Manmeet asks Anisha when their marriage got fixed to which Anisha answers that they fixed the alliance two hours ago.

Anisha says that she met Rajkumar a few hours back for the first time which shocks the Shergills.

As Anisha asks Manmeet about Raj, she says that Raj is a decent man with many hidden talents.

Anisha says that she still has the accessibility to say no to the marriage and wants to know more about Rajkumar.

Rajkumar runs away to the washroom and regrets coming there as he knows Manmeet is far more savage than him.

Puneet bumps into Rajkumar and asks him if he wants to marry Anisha but Rajkumar does not answer.

After Rajkumar and Anisha leave, Anisha asks Rajkumar why he took her to Manmeet’s house and if he and Manmeet have something going on between them.

Rajkumar denies having any relationship with Manmeet and acts oblivious.

Manmeet thinks about Rajkumar’s behavior and feels that weird feeling creeping up her chest again.

Later at night, Puneet tells Ajeet that Rajkumar does not want to marry and suggests that they should stop his marriage.

Ajeet strictly refuses Puneet to do anything as Raj’s father is dangerous.

After three days, Manmeet and Hussain receive a gift box that carries the invitation to Rajkumar and Anisha’s engagement.

Rajkumar gets to know that the people that beat him up have been found out by Murari and gets nervous as they know that he is a comedian.

Rajkumar calls Manmeet for help but she does not pick up his call which makes him angry.

Anisha calls Rajkumar and asks him to go to Cuckoo’s Club with her as a very good stand-up comedian comes there.

Rajkumar says that he does not like comedy and rejects Anisha’s proposal.

© Copyright tellybest.com, 2022, 2023. All Rights Reserved. Unauthorized use and/or duplication of any material from tellybest.com without written permission is strictly prohibited.
Cached Saved on: Monday 21st of November 2022 07:00:45 AMCached Disp on: Sunday 4th of December 2022 11:22:10 PM