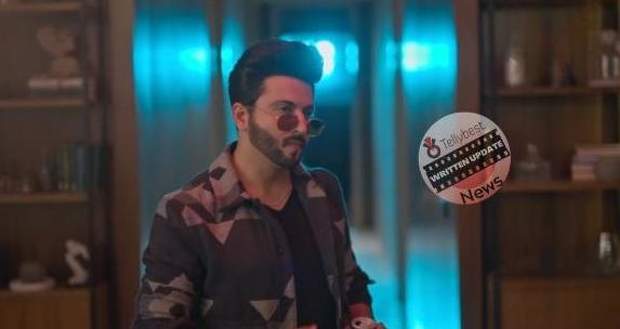 Vidya complains that marriages are the worst and that she should also think of being like Manmeet and having a baby herself.

Manmeet laughs as she tells Vidya that marriage is not a bad thing but they just have to keep their eyes open.

Later, at the office, Manmeet looks at Rajkumar with bored eyes while Hussain tries to calm her.

Manmeet demands to know what the problem is and guesses it correctly, making Hussain and Rajkumar get surprised and worried at the same time.

Manmeet takes the legal application and goes to fix it herself while Hussain stops Rajkumar and tells him to let Shergil handle the problem herself.

Later, Manmeet reaches Patekar's office and he gets surprised to see such a well-known person coming into his office herself.

Manmeet apologizes to Patekar, asking him what the penalty and the fees are as she will pay them along with the promise that this mistake won't happen again.

Patekar gets impressed with Manmeet's wiseness and tells her that she deserves to be on the cover of the magazine.

After reaching the office, Manmeet tells Hussain that for the first time in her life, she had to say sorry even when the mistake wasn't hers.

Rajkumar feels insulted and starts bugging Manmeet telling her to say everything to his face.

She tells him that he made the mistake even worse within 24 hours and she solved all the problems in 10 minutes.

Rajkumar further talks to Anmol's picture to annoy Manmeet while she warns him not to bring Anmol in between and makes him leave.

Later, Manmeet leaves the office saying that they will discuss the SkyCity meeting once she returns and tells the staff not to leave before the meeting.

During the meeting, Manmeet sees that Rajkumar isn't present and tells everyone to call him otherwise the meeting won't start until everyone is present.

Later, Rajkumar calls Manmeet and she puts him on speaker and asks him why he left without informing anyone at the office.

They both argue as Rajkumar tells her that he came to meet his "baby".

Manmeet wittily tells Rajkumar that his Jaanu has been waiting for him at the office for two hours and gives the call to a girl who starts crying and arguing with Rajkumar in front of everyone.

The girl is Rajkumar's girlfriend who came to surprise him at the office but he wasn't there.

© Copyright tellybest.com, 2022, 2023. All Rights Reserved. Unauthorized use and/or duplication of any material from tellybest.com without written permission is strictly prohibited.
Cached Saved on: Monday 21st of November 2022 06:02:43 AMCached Disp on: Thursday 1st of December 2022 12:18:14 PM