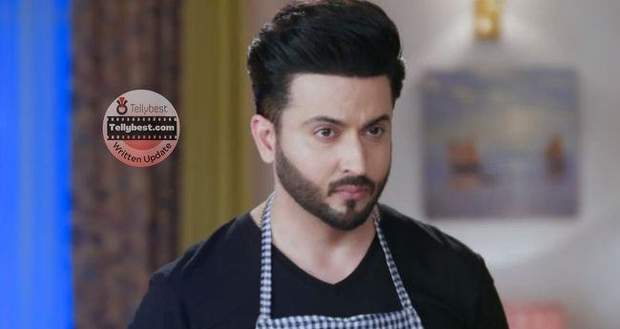 Today's Sherdil Shergill 29th December 2022 episode starts with Manmeeet asking Nirali about the pooja she was talking about earlier.

Nirali tells Manmeet that it is nothing so Manmeet tells Nirali that she is not against poojas.

So Nirali tells Manmeet that this pooja has to be done today only and Manmeet has a press conference.

After hearing this Manmeet says that she will cancel her meetings and will do this pooja first, Murari butts in and says that he will get it cancelled she need not worry.

Later, Raj walks out of his room and sees Manmeet and Nirali working together on the pooja arrangement and he gets shocked.

At the same time, Bhairav calls Raj and asks how this magic happened and Raj replies he is as shocked as Bhairav.

Further, Bhairav says that Raj did a good job controlling and teaching Manmeet about family values.

Raj asks Brijesh what is happening and Brijesh tells him that there is a pooja going on.

At the same time, pandit ji tells Manmeet to get flowers and Raj goes to her and dramatically flirts with her.

Like a ball buster, Manmeet scolds Raj for waking up so late and Raj jokes around that he is following his son.

Manmeet points out their age difference and says that he has to go to the office as she will not go.

Raj jokes around and says that this is an entirely different  Manmeet and he goes to work.

Later, in the pooja, Manmeet asks the pandit ji the meaning of the mantra but Nirali quiets her and the press arrives at the Yadav house.

Manmeet gets shocked and tells Murari that she will do the interview after the pooja.

Meanwhile, in the office, Raj tells the builders various ideas from different builders that the investors do not like.

Mishra ji goes away and calls Husain to hurry as Raj is doing the opposite of what Manmeet usually does.

Husain hurries to the office and meets the investors and asks for another chance.

Meanwhile, the pooja ends and Manmeet goes to the press.

One of the reporters, informs Manmmet that she did a putrakameshti pooja which is totally the opposite of being a modern girl in this society.

After hearing this Manmeet look for Nirali and sees that she was lied to about the pooja and she looks off her phone for the details of this pooja.

Manmeet cleverly answers all the reports that this pooja has a totally different meaning in today’s world.

This pooja is done for the betterment of the family and is a known family tradition.

At the end of the interview, Manmeet calls Nirali rendering her shocked.