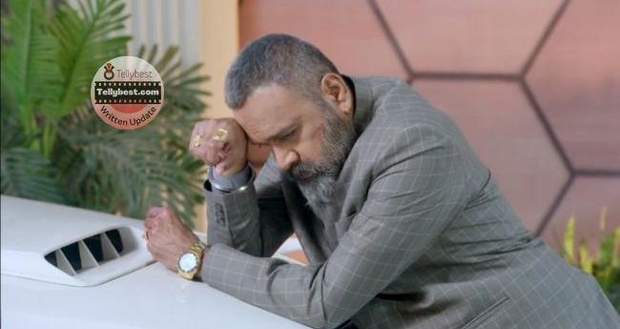 Today's Sherdil Shergill 29th November 2022 episode starts with Manmeet widening her eyes as she realizes what Rajkumar means by wanting to taste "mithai".

Manmeet hits Rajkumar on his chest while Rajkumar acts as if he is hurt in his wounded area making Manmeet feel guilty about it.

As Manmeet comes closer to Rajkumar, he pulls Manmeet closer and slowly moves towards her lips with his eyes fixated on her.

Ajeet calls Manmeet to come for a moment, interrupting the intimate moment between her and Raj.

Manmeet asks Raj to go home and take a rest as she knows how she has to handle her parents after what they witnessed a bit ago.

Rajkumar asks if he should talk for a moment to Ajeet but Manmeet sends him home and comes to Ajeet.

Ajeet tells Puneet that he has no problem with Rajkumar as Manmeet's life partner, however, Raj's family is very dangerous and is not suitable for Manmeet.

However, Manmeet explains to Ajeet that she has changed her vision due to Rajkumar and is ready to adjust a bit if that is what it needs to be with him.

Ajeet requests Manmeet to return to Shimla with him first but gives up after hearing her confession.

Manmeet says that she can achieve anything as long as she has her parents, Anmol, and Rajkumar beside her.

Meanwhile, Pankhuri calls Deepu and learns that he and Raj have come to Manmeet's house.

After Rajkumar returns, Bhairav hands him the visa to Australia and asks him to fulfill his dream of winning that competition in Sydney.

Rajkumar says that he has changed over time and does not want to win that competition anymore.

As Bhairav tells Raj that he will fulfill every wish of his, Rajkumar tells everyone about his marriage proposal to Manmeet.

Everyone gets shocked to hear that Manmeet has agreed to the marriage and Anmol will be their one and only child even after marriage.

Bhairav and others try to make Raj understand that Anmol is not his son but Ram says that he does not care about that.

Nirali lands a slap on Raj's face and asks him if he has gone mad by taking such a decision.

Bhairav makes it clear that Manmeet is the enemy of that household and will never become the daughter-in-law of that family.