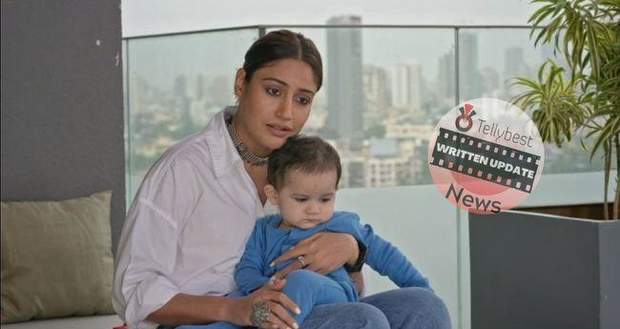 Today's Sherdil Shergill 29th September 2022 episode starts with Rajkumar getting a call from his girlfriend, Nikki, who accuses him of seeing someone new behind her back.

Hearing this, Rajkumar tries to change Niki's mind but she cuts the call furiously.

Meanwhile, at the office, Niki thanks Manmeet for staying late with her but Manmeet just smirks.

After Nikki leaves, Manmeet gets a call from her sister Gunjan, who urges her to come to the wedding without Anmol but Manmeet says she cannot leave Anmol alone.

This statement frustrates Gunjan and she yells that maybe Manmeet should find a husband to please their father but Manmeet cuts the call.

On the other hand, in Rajkumar's home, his mom finds a book with roses and a note.

Seeing his mother reading the note, Rajkumar’s brother runs to tell Rajkumar about it.

A worried Rajkumar arrives in the living room while his father advises Rajkumar to sit with him afterward.

Rajkumar lies to his mother saying that the letter is fake and he does not know anyone.

As soon as Rajkumar leave, other family members gather around his mother and start suggesting that there is indeed a "janu" in Rajkumar’s life.

Even Rajkumar’s younger brother announces that there is a "baby" and a "janu" in Rajkumar’s life much to everyone’s shock.

In the meantime, Rajkumar arrives in the café to scold Nikki for sending him flowers.

Further, Rajkumar adds that his family will marry them off if they learn about Nikki.

However, Nikki manipulates Rajkumar by suggesting that maybe Manmeet is the one who sent the flower to his home to create problems between them and Rajkumar believes it.

Later while Manmeet is busy on her video call meeting, Rajkumar arrives and screams at Manmeet for sending him flowers.

Hearing this, an angry Manmeet sarcastically comments that Rajkumar is just a calendar number to her and nothing more.

Looking at Manmeet’s angry face, Rajkumar tries to calm her down and runs away like a little kid.

While Rajkumar is trying to call Nikki to scold her for lying, Manmeet explains her situation to Hussain and urges him to find a rental husband for her.

Hearing this, Hussain laughs and suggests Rajkumar for the role.

© Copyright tellybest.com, 2022, 2023. All Rights Reserved. Unauthorized use and/or duplication of any material from tellybest.com without written permission is strictly prohibited.
Cached Saved on: Monday 21st of November 2022 07:32:53 AMCached Disp on: Wednesday 7th of December 2022 12:19:32 PM