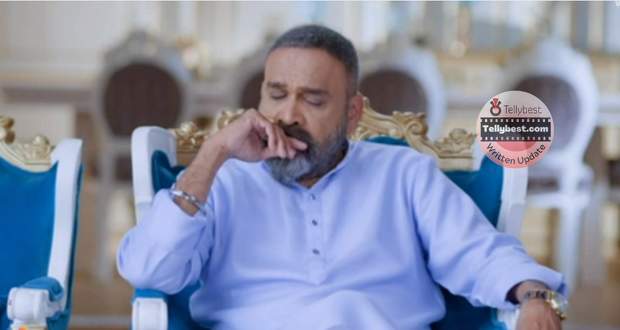 Today's Sherdil Shergill 2nd December 2022 episode starts with everyone getting shocked on seeing Rajkumar coming out of Manmeet’s room and getting silent.

Rajkumar says that he was there for office work and tries to defend himself in front of his parents.

As Nirali starts to scold Rajkumar for disobeying her command, Bhairav asks Nirali to calm down as these little things are inevitable to happen.

Bhairav tells about his and Nirali’s marriage time when he went to see her in secret at the back of her house.

Everyone laughs awkwardly while Raj and Manmeet say that they have to leave for the office.

Puneet stops them from leaving and says they should do the roka as everyone is present.

Ajeet asks Bhairav how he is so active when he just had a heart attack to which Bhairav replies that he is taking care of himself.

Puneet expresses concern about the marriage happening in such a hurry to which Bhairav responds that he wants it to be over as soon as possible.

Rajkumar plays with Anmol and makes him silent by taking him in his lap which endears everyone.

As the matter of the DNA reports come into discussion, Bhairav makes it clear that Rajkumar has no blood relation with Anmol.

Puneet gets stunned on hearing that as she remembers changing the samples by herself so that the result comes positive.

After the completion of the roka, Bhairav and Nirali leave Manmeet’s house and discuss things among themselves.

Nirali points out how Rajkumar has a unique bonding with Anmol and asks Bhairav if he is sure that Raj is not Anmol’s father.

Meanwhile, Chhoti informs Pankhudi and her husband about her plan to stop the marriage.

Choti shows them a scorpion and plans to hurt Anmol with that so that all marriage preparations come to a halt at once.

The next day, Manmeet gets ready for her sangeet and practices dance when Hussain comes to her house.

Hussain informs her about Paategar going missing since he went to Sky City to investigate the accident.

© Copyright tellybest.com, 2022, 2023. All Rights Reserved. Unauthorized use and/or duplication of any material from tellybest.com without written permission is strictly prohibited.
Cached Saved on: Wednesday 25th of January 2023 12:53:29 PMCached Disp on: Monday 6th of February 2023 01:17:05 AM