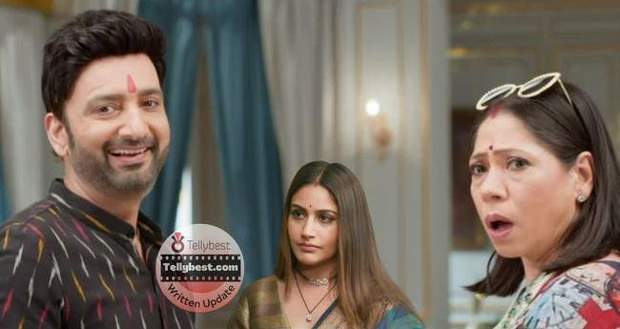 Today's Sherdil Shergill 30th December 2022 episode starts with Manmeet calling Nirali to herself and she introduces Nirali to the media and then asks her about the pooja.

Afterward, Raj comes in with a box of sweets and tells Bhairav that he has landed an investor and they are going to make a 160-floor building.

Hearing this Bhairav, Nirali, and Manmeet gets really happy and they celebrate.

At the same time, Husain calls Manmeet so she goes to her room to take the call.

Later, Bhairav, Nirali, Raj, and Pankhudi pray to shiv ji, and Bhairav tells Pankhudi to give Prashad to Murari and Manmeet Bhairav says that now Manmeet doesn’t have to work anymore and decides to have a party.

Meanwhile, Husain tells Manmeet that it was a disastrous meeting and she has to meet the clients and present them with her ideas.

At the same time, Manmeet says that she will take her clients back but she doesn’t want Raj to know anything about this at all.

To her bad luck, Pankhudi hears this and leaves after hearing the half conversations.

Manmeet tells Hussain that she can’t tell Raj the truth as it will hurt him and tells him that she is coming.

Later in the garden, Pankhudi blabs everything and Bhairav tells them that no one will tell Raj about this as he will do this himself.

Raj asks her where she is going and if they should go and have dinner in a restraint.

Manmeet lies to Raj and says that she is going to meet her friends and will be back soon and Raj should take care of Anmol.

Raj tells that he wants to go as well but Manmeet stalls him and leaves.

After a while, Bhairav tells Raj they should go to the office and then to the site.

In the office, Manmeet presents the clients with her plans which seem to impress the investors they even congratulate her on her marriage.

At the same time, Raj and Bhairav enter the office and see that Manmeet lied about going to her friend and she is giving the same client her presentation.

At home, Nirali and Pankhudi badmouth Manmeet along with Murari.

Betrayed Raj leaves the office and Manmeet leaves the meeting as she feels sorry for what she did to him.

Back at home, Nirali fills poison in Raj’s ears and tells that Manmeet is jealous of his success.

© Copyright tellybest.com, 2022, 2023. All Rights Reserved. Unauthorized use and/or duplication of any material from tellybest.com without written permission is strictly prohibited.
Cached Saved on: Wednesday 25th of January 2023 05:43:12 PMCached Disp on: Wednesday 1st of February 2023 09:10:46 PM