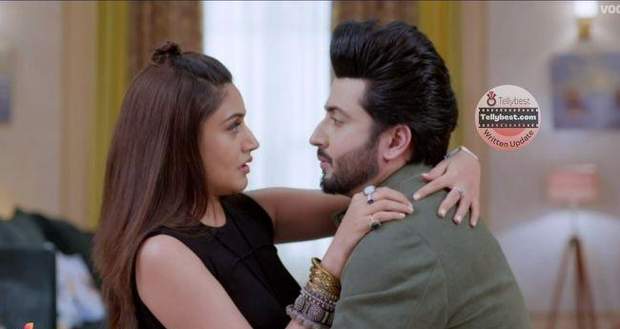 Bhairav tells Rajkumar to stop and says his whole point has not been declared yet.

Rajkumar replies that whatever was needed to say has been said by Bhairav and he does not want to hear anything else.

Coming to a decision, Rajkumar announces that he Will marry money despite everyone's comments about it.

Rajkumar even says that he is ready to leave the house and even the town because he wants to stay with Manmeet and Anmol.

Suddenly Bhairav starts to feel dizzy and rashes on the sofa while everyone rushes to check on him.

Rajkumar gets nervous and asks Bhairav if he is okay while trying to pick him up.

The doctor arrives to see Bhairav and checks on him while asking the ambulance to come as soon as possible.

Suddenly Bhairav asks the doctor to stop doing what he is supposed to do and listen to him as he is doing an unnatural act to fool the family members.

Bhairav tells the doctor about Rajkumar's case and asks him to cooperate as he wants his son to learn a lesson.

The doctor follows Bhairav's instructions and announces that Bhairav is in critical condition.

However, Bhairav sees Rajkumar and asks him to call Manmeet so that she comes to their house without wasting any time.

Chhoti and Pankhudi discuss the matter with Nirali and ask her how Rajkumar could propose to Manmeet for whom their family had to suffer this much.

Suddenly Rajkumar welcomes Manmeet into the house which shocks the family members and they ask him how she is allowed to get inside.

Rajkumar tells them that he was the one who called Manmeet into the house and has something to discuss with them.

Bhairav asks the doctor to take him into the living room and announces that he is ready to accept the relationship between Rajkumar and Manmeet.

Rajkumar gets happy to hear his father's decision and hugs him for understanding his feelings.

However, Bhairav announces that he has a condition for marriage and asks Rajkumar and Manmeet to marry each other within one week.

Everyone gets shocked to hear that decision and questions Bhairav as to why he has agreed to let Rajkumar marry Manmeet.

Bhairav does not answer anyone and gear goes inside with the doctor.

Choti questions division and expresses her body for the future of the family with Anmol coming in as Rajkumar's son.

Nirali silences Chhoti and tells them that she will talk to Bhairav and goes to his room to put up a discussion.

Meanwhile, Manmeet thinks that the decision to marry is made in a hurry and suggests that they take a break before taking any further steps.

Rajkumar assures Manmeet that he will handle everything once the marriage is done and asks her to convince Ajeet and Puneet somehow.

At the same time, Nirali discovered that Bhairav is doing a fake act of having a heart attack and questions his motives.

Bhairav explains to Nirali that he has done everything so that Rajkumar does not leave the house and he will somehow separate Rajkumar and Manmeet before they get married.

© Copyright tellybest.com, 2022, 2023. All Rights Reserved. Unauthorized use and/or duplication of any material from tellybest.com without written permission is strictly prohibited.
Cached Saved on: Wednesday 25th of January 2023 10:53:03 AMCached Disp on: Wednesday 1st of February 2023 08:53:00 PM