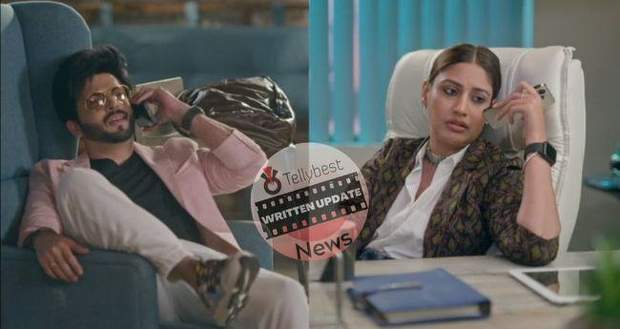 Today's Sherdil Shergill 30th September 2022 episode starts with Manmeet getting baffled after she hears Hussain’s suggestion of asking Rajkumar to act as her fake husband.

Manmeet denies the suggestion once but Hussain tries to convince her by saying that Raj is undoubtedly a handsome man and does not even work all day at the office.

Still, Manmeet does not agree with the suggestion and clearly states it to Hussain when she notices Raj leaving.

Manmeet decides to silently follow Raj as she wants to know where he disappears suddenly during weekdays.

Raj gets into an auto while Manmeet instructs her driver to follow the auto and see where it goes.

On her way, Manmeet receives a call from Gunjan who asks about her decision to come to the wedding.

Manmeet clearly states that she will not attend the wedding if she cannot take Anmol with her which hurts Gunjan’s sentiments and she hangs up the call.

After arriving at his destination, Raj enters a building and enters a room after saying a password “ABCD” completed by “EFGH”.

Manmeet follows Raj and tries to enter the room but gets stopped by two buffed-up men who instruct her to enter the club from the main entrance.

As Manmeet looks at the logo on the wall, she notices the sign saying “Kuku’s Club” and realizes that she is at a club.

Hearing the name, Manmeet stops in her tracks and gets shocked to see Raj walking onto the stage with a totally different around him.

Raj introduces himself and says how he was brought into life by his parents after a huge gap between him and his elder sisters.

Manmeet sits in a corner and hears Raj’s jokes and puns which eventually brings a smile to her face.

On the other hand, Gunjan chugs down phenyl in the washroom after hearing Manmeet’s response as she wants her sister to be there at the wedding.

Gunjan’s parents discover her in a poisoned state in the washroom and rush to the hospital with her.

Back to the club, Raj mentions Manmeet as a self-righteous and badass woman and compliments her on her capabilities.

Manmeet gets a bit fascinated to hear such good things about her from Raj and smiles to herself while Raj leaves.

After coming back home, Raj bumps into Bhairav who asks him if he is still doing stand-up comedy as a job.

Bhairav narrates the story from his past when his brother was beaten to death because the sarpanch got offended by his joke during a performance.

Raj gets gloomy after hearing the story while Bhairav states clearly that he will end his relationship with Raj if he does comedy as a job.

The next day, Manmeet calls Raj and asks him to come to her house surprising him.

Raj arrives at Manmeet’s house where she gives him a sweet dish called “Siddu” from Himachal in return for his mother’s “Gajar ka Halwa”.

Before Raj could leave, Manmeet says that she was unaware of the fact that Raj respected her so much.

Manmeet smirks while Raj’s jaw touches the ground with absolute horror as his secret is out of the bag.