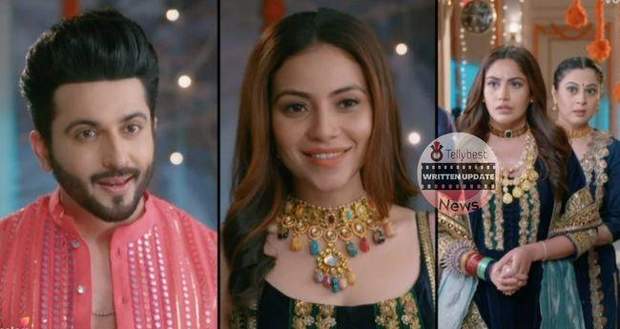 Today's Sherdil Shergill 31st October 2022 episode starts with Manmeet opening the door and getting a surprise shock to see Raj.

She sarcastically asks him about his visit and he begins his drama and tells her that he has very important work with her.

Manmeet sighs, annoyed by him while her parents come and see Raj.

Puneet gets excited upon seeing him and tells Manmeet to take him to her room and talk over there.

Manmeet finds this idea ridiculous but Raj insists upon listening to Puneet. They go to Manmeet's room while Puneet and Ajeet wait outside.

Ajeet asks Puneet why she let a man walk into their daughter's bedroom and Puneet explains that this could resolve all their conflicts.

As they wait for Manmeet and Raj to return, Ajeet knocks on the bedroom door when Raj pushes it open and walks out.

Manmeet follows him shouting and asking him to never return, collapsing her mother's wish.

Later, Raj and Bhairav reach the godown to enquire the men who beat Raj up. While Mr Yadav starts asking questions, Raj gets nervous.

The man tells Bhairav that he tried to loot Raj and that's why he beat him.

Bhairav thinks he's lying and asks Himmat to beat him until he tells the truth.

Even after a lot of beating, the man sticks to his statement and Bhairav and Himmat leave him.

Raj sighs in relief as he replays his whole masterplan in his head.

For his plan, Raj paid a man 5 lac rupees that he took from Manmeet. He told the man to lie to his father about the robbery.

He is proud that the plan worked and now his ticket to Sydney is a sure shot.

Hussain is a little surprised to see Manmeet showing up at the office today.

He asks if she's going to attend Raj's engagement to which she replies with a sure no.

Hussain tells her that if not for Raj, she should go for Mr Yadav as it would be helful to maintain good professional
relations with him.

Contemplating whether to go or not, Manmeet remembers the good moments she had with Raj.

Manmeet then decides to attend his engagement.

© Copyright tellybest.com, 2022, 2023. All Rights Reserved. Unauthorized use and/or duplication of any material from tellybest.com without written permission is strictly prohibited.
Cached Saved on: Monday 21st of November 2022 07:02:23 AMCached Disp on: Thursday 1st of December 2022 01:50:02 AM