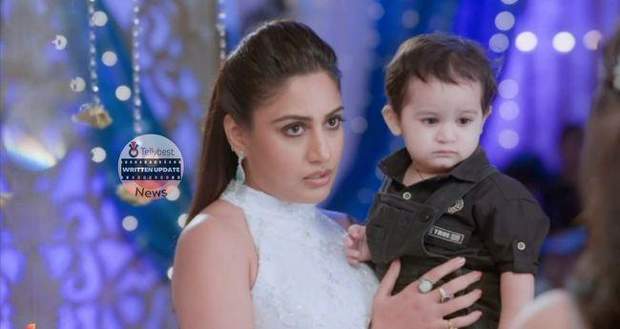 Today's Sherdil Shergill 3rd November 2022 episode starts with Gunjan’s mother-in-law telling everyone that Rajkumar is Manmeet’s husband as he fulfilled the duties of being a bother-in-law of Gunjan.

Manmeet asks Gunjan’s mother-in-law to stop talking and announces that she and Rajkumar lied to everyone for the sake of Gunjan’s marriage.

Manmeet explains to Gunjan’s mother-in-law that she and Rajkumar pretended to be married because she would have bashed her for having Anmol as a single mother.

Anisha’s father claims that he is not ready to let Anisha marry Rajkumar when he has such a messed up past.

Bhairav tells Gopal (Anisha’s father) that he is deeply apologetic for the scene caused and assures that there is nothing true about that.

Anisha interrupts their discussion and says that she has the right to take decisions about her own life.

Holding Rajkumar’s hands, Anisha tells him that she liked him from the day they met but whatever happened earlier made her contemplate her decision.

Anisha says that her heart feels that Rajkumar is telling the truth but she still is suspicious of the whole situation.

Rajkumar asks Anisha what he has to do to make her believe that he and Manmeet have nothing going on between them.

Anisha announces that she wants a DNA test done between Rajkumar and Anmol so that it gets proven that Rajkumar is not his father.

Hearing Anisha’s words, Manmeet gets shocked while others seem confused.

Bhairav hears about the test and decides that the test will be done and asks Murari to take Anmol to the lab.

As Murari comes toward Anmol, Manmeet stops him and asks who gave them the right to do a DNA test on her son.

Manmeet says that she has had enough of the drama but will not keep silent if anyone dares to touch Anmol.

Bhairav tells Manmeet that he just wants Anmol for the test and will not snatch him away from her but Manmeet denies him.

Rajkumar tries to calm them down while Nirali shifts all blame on Manmeet for causing this ruckus.

Manmeet says that the blame is hers when the issue is with Rajkumar and his to-be wife and decides to leave with Ajeet and Puneet.

Before leaving, Manmeet warns Gunjan’s mother-in-law that the results will not be good if she tries to harm Gunjan in any way.

Anisha and her family also leave while Bhairav asks for 1 week to prove that whatever Nikki accused Rajkumar of is not true.

© Copyright tellybest.com, 2022, 2023. All Rights Reserved. Unauthorized use and/or duplication of any material from tellybest.com without written permission is strictly prohibited.
Cached Saved on: Monday 21st of November 2022 02:19:36 AMCached Disp on: Thursday 1st of December 2022 12:12:47 PM