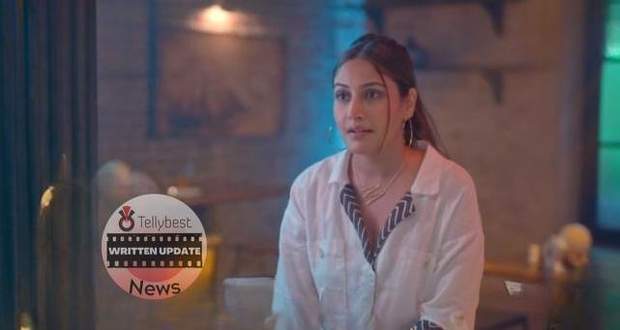 Today's Sherdil Shergill 3rd October 2022 episode starts with Manmeet asking Rajkumar to compliment her directly if he thinks of her as such an amazing person.

As Manmeet mentions the Cuckoo Café, Rajkumar gets pale as he never wanted to let anyone, especially Manmeet, know about his secret.

Manmeet tells Rajkumar about how good he is in stand-up comedy and asks him why he is wasting his time in the office job.

Rajkumar begins to panic as he cannot let Bhairav know about him doing stand-up comedy and begins to run after Manmeet asking her to keep it a secret.

Manmeet asks Rajkumar to calm down for some time and relax as she is not doing anything against him.

After calming down a bit, Rajkumar tells Manmeet about his family’s past when his uncle got killed by some villagers because of his profession.

Rajkumar says how that incident had left Bhairav traumatized for life and he cannot bear to see anyone doing stand-up comedy after that.

Hearing Rajkumar’s story, Manmeet asks him why he is lying to his father even though he knows well that the truth will come out eventually.

Rajkumar replies that he is not like her who can stand in their life by themselves and needs his father’s wealth and protection.

However, Rajkumar informs Manmeet that he will tell the truth to his family after 3 months when he wins the once-in-a-year stand-up comedy competition held in Australia.

Rajkumar tells Manmeet that he wants to win the prize money of 1 million dollars and prove to his father that comedians have respect too.

Meanwhile, Bhairav talks about many people wanting to own a flat on the 140-floor building project and suggests that they should increase the floors from 140 to 150.

As Vidya leaves for an urgent affair, Manmeet gives Rajkumar the responsibility of babysitting Anmol and gets a call from her mother.

Manmeet’s mother informs her about Gunjan’s suicide attempt because Manmeet refused to attend her wedding.

Manmeet gets shocked to hear that and tries to advise Gunjan, but her father tells her they do not need suggestions from her.

After the phone call, Manmeet breaks down in tears and asks Rajkumar to leave.

Later, Manmeet thinks about the matter deeply and concludes that she should ask Rajkumar to help her out.

Manmeet comes to meet Rajkumar while he is busy trying to convince his girlfriend but has to leave eventually.

Manmeet asks Rajkumar if he wants to come to Himachal with her while Rajkumar asks for the reason.

As Manmeet tells Rajkumar that he has to act as her husband and Anmol’s father for four days, Rajkumar stumbles on his footing with a wide-open mouth.

© Copyright tellybest.com, 2022, 2023. All Rights Reserved. Unauthorized use and/or duplication of any material from tellybest.com without written permission is strictly prohibited.
Cached Saved on: Monday 21st of November 2022 08:34:30 AMCached Disp on: Wednesday 7th of December 2022 01:13:28 PM