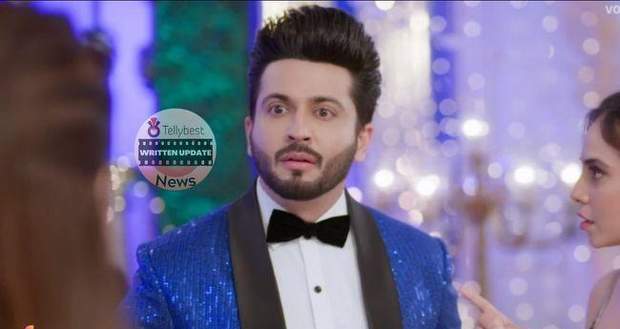 Today's Sherdil Shergill 4th November 2022 episode starts with Puneet asking Ajeet to call Gunjan’s in-laws once as Manmeet talked so straightforwardly to them.

Ajeet tells Puneet not to worry as Manmeet did the right thing and he will stand with her through everything.

Meanwhile, Bhairav thinks about the incidents that happened during the engagement and thinks about some questions arising in his mind.

Murari apologizes to Bhairav for not being able to talk back to Manmeet while Bhairav questions him who called Nikki and Gunjan’s in-laws to the function.

Murari assures Bhairav that he will find out the person behind the conspiracy and asks him how they will do the DNA test.

Later, the doctor comes to check on Nirali as her health degrades after the disruption of Rajkumar’s engagement.

Bhairav talks with the doctor about the DNA test and asks him to make arrangements for a test to be done the next day.

Rajkumar calls Puneet to find out how Manmeet is doing and asks what problem is there to do a simple DNA test which makes Puneet upset.

Puneet suggests Raj talk with Manmeet by himself and resolve the issue.

The next day, Manmeet gets a call from the office where Bhairav asks her to come as he has something to discuss with her about the project.

Manmeet leaves the house whereas Murari instructs his men to go into the house and snatch Anmol away.

Rajkumar hears Murari’s conversation and asks him what he is up to by harming Anmol.

Murari explains to Rajkumar that it is Bhairav’s command to snatch Anmol which angers Rajkumar and he asks for the keys to the study.

Meanwhile, the goons under Murari forcefully barge into the house and ask Puneet to hand over Anmol to them for 1 hour.

Puneet refuses to give Anmol after which they threaten her by putting a knife in Vidya’s throat.

However, Vidya already calls Manmeet secretly and asks her to come home urgently.

Rajkumar arrives first and asks the goons to give Anmol back but they insist Rajkumar not interfere in the matter.

Rajkumar takes out a gun and points it at the goons asking them to give Anmol back immediately.

The goons hand over Anmol to Rajkumar while he asks them to get out of the house.

Just then, Manmeet enters the house and misunderstands the situation by seeing Rajkumar pointing a gun toward Puneet and Vidya with Anmol in his arms.

Manmeet takes Anmol away from Rajkumar and lands a slap on his face which makes Rajkumar accidentally pull the trigger of his gun.

Both Raj and Manmeet get shocked upon hearing the sound while Puneet screams Manmeet’s name.

© Copyright tellybest.com, 2022, 2023. All Rights Reserved. Unauthorized use and/or duplication of any material from tellybest.com without written permission is strictly prohibited.
Cached Saved on: Monday 21st of November 2022 05:26:44 AMCached Disp on: Friday 9th of December 2022 04:32:40 AM