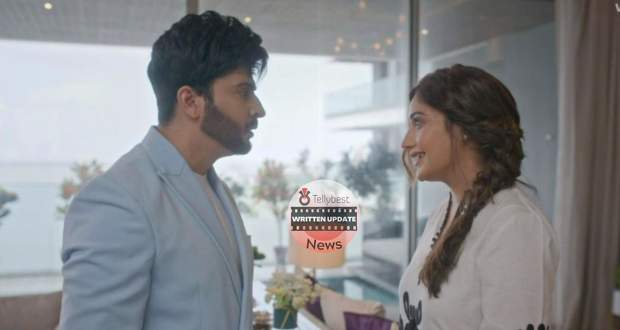 Helping Rajkumar to sit back, Manmeet asks him to calm down and tells him that he just has to act like her husband in front of her family.

Rajkumar thinks for a while and concludes that Manmeet is trying to take advantage of him because she knows about his secret.

Manmeet clears up that she is not taking advantage of him or blackmailing Rajkumar by using his secret and is asking for his help with a genuine heart.

Rajkumar understands his situation but tells Manmeet that he is not fit for the role.

Trying to convince Rajkumar one more time, Manmeet tells him about her family’s situation where her sister wants her to attend her wedding but her father has asked her not to bring Anmol with her.

Manmeet tells Rajkumar that only her parents know that she is a mother of a child and does not approve of her motherhood without a husband.

Still, Rajkumar refuses Manmeet’s offer and gives the reason that he does not look like a father from any perspective and does not fit the given role.

After Rajkumar leaves, Manmeet becomes upset as she hoped that Rajkumar would understand her situation and help him.

As Rajkumar arrives home, he gets welcomed by his mother who asks him about the girl who sent him flowers and asks him to bring her home.

Rajkumar somehow dodges the question and tells his mother that someone is playing a prank on him by sending him flowers.

A scene appears where Rajkumar has gone to the stage to perform his comedy when Bhairav walks in while clapping his hands.

Manmeet appears and laughs at Rajkumar as she is taking her revenge on him for ditching her idea.

Bhairav stares at Rajkumar with angry eyes and falls on the floor with a heart attack while Rajkumar wakes up from his dreadful dream.

Rajkumar’s elder sisters appear to inquire about his girlfriend after Nikki calls his home.

Later, Nikki comes outside Rajkumar’s house and shocks him as she wants him to introduce her to his family.

Without finding any other excuse, Rajkumar says he is going on a business trip with Manmeet for the next 7 days and will tell his family about them after returning.

The next day, Manmeet acts nonchalantly as Rajkumar comes to meet her and asks him to forget about her proposal.

As Manmeet tells Rajkumar that she will ask Hussain about the matter, Rajkumar dismisses the thought and tells her that he is ready to help her.

Rajkumar tells Manmeet how Nikki is troubling him by introducing her to his family and he has no choice but to run away.

However, Rajkumar proposes a few conditions such as Manmeet talking politely to him at the office, never questioning him about leaving, etc which Manmeet surprisingly agrees to.

Rajkumar nods his head in agreement and asks Manmeet when they have to leave for Shimla.

© Copyright tellybest.com, 2022, 2023. All Rights Reserved. Unauthorized use and/or duplication of any material from tellybest.com without written permission is strictly prohibited.
Cached Saved on: Monday 21st of November 2022 03:18:32 AMCached Disp on: Thursday 1st of December 2022 01:23:00 PM