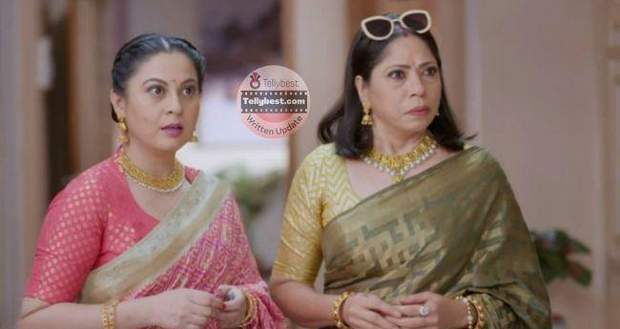 Manmeet reminds Husain that it was Murari’s doing and that they should move on from this chapter.

At the same moment, Gunjan and her in-laws come and greet Manmeet.

Manmeet notices that something is wrong with Gunjan and there is something on her mind too.

Manmeet inquires but Gunjan turns the conversation and goes to meet Anmol.

At the Yadavs, Raj teases Mishra Ji and teaches him a few dance steps while, at Manmeet’s house, Sangeet’s preparation is done in a full enthusiastic way.

Afterward, Priyanka asks Pankhudi where she has kept the box with the Scorpio.

Pankhudi tells that it is in a safe location and she asks if the Scorpio will bite her hand or not.

To this Priyanka says that the Scorpio is reserved for someone else.

On the other hand, Manmeet drags Gunjan for a dance but Gunjan jerks off her hand and tells her that the bag was very heavy.

Gunjan’s mother-in-law butts in and tries to manipulate the conversation but Manmeet indirectly tells her to leave.

Manmeet tells Gunjan that her mother-in-law's idea is good and that she should find out what all songs are going to be played.

Hearing this Gunjan makes an excuse and leaves Manmeet.

Manmeet calls Mishra Ji to find the songs that will be played there but Raj intercepts the phone and tells Manmeet some cheesy lines.

While blushing Manmeet tells him that she can’t handle his filmy lines and asks him to tell her about the playlist.

Raj tells her that he won’t and cuts the call.

Priyanka checks the Scorpio and tells it that he will be freed very soon.

At the same time, Bhairav comes and asks what Priyanka and Pankhudi are doing with that box.

So Pankhudi lies and tells him that it is her gift and can’t be shown to him.

At Manmeets, Mehandi is done and everyone enjoys the ambience. Manmeet sees Ajeet play with Anmol and she remembers all the golden moments with her father.

Puneet goes to Manmeet and asks her if she is remembering the moments when Ajeet held Anmol for the first time.

Manmeet nods and questions Puneet about how come she knows whatever Manmeet is thinking.

Further Manmeet thanks Puneet for everything and Puneet leaves her to attend to guests.

On the other hand, Gunjan’s mother-in-law forces her to talk to Manmeet for the contract or get 2 crores in cash, and Manmeet notices this.

At the Yadav’s, Nirali pouts and doesn’t leave her room even after Bhairav calls her.

Meanwhile, Manmeet questions Gunjan and tells her that she wants to know what is bothering her.

On the other hand, Nirali gets suspicious of Priyanka’s plan and Raj overhears some of their conversations.

© Copyright tellybest.com, 2022, 2023. All Rights Reserved. Unauthorized use and/or duplication of any material from tellybest.com without written permission is strictly prohibited.
Cached Saved on: Thursday 26th of January 2023 05:34:46 AMCached Disp on: Thursday 2nd of February 2023 08:01:22 PM