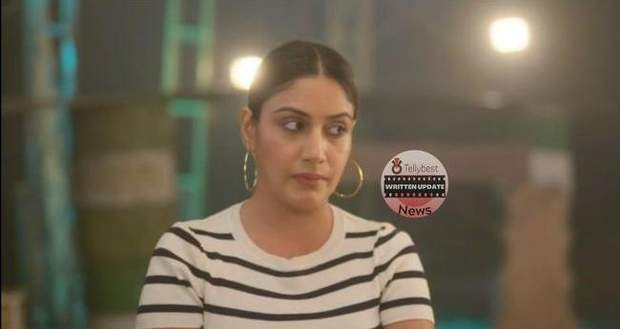 Today's Sherdil Shergill 5th October 2022 episode starts with Manmeet calling Puneet (Manmeet’s mother) and informing her that she will be coming to Gunjan’s wedding and will arrive in Shimla by Saturday.

Puneet calls Gunjan and tells her the good news after which they share a hug while Ajeet (Manmeet’s father) stares at them silently.

Ajeet comes and asks Puneet whether Manmeet is coming alone or not as he does not want his reputation to get soiled.

Puneet says that Manmeet did not mention whether she is coming alone or with Anmol but it is confirmed that she is coming to the wedding.

Meanwhile, Rajkumar asks Manmeet when they have to leave for their trip which makes Manmeet extremely happy.

Manmeet tells Rajkumar that they do not have much time and begins Rajkumar’s training with Anmol and her family information the next day.

Rajkumar struggles to handle Anmol stressing Manmeet as she has to train Rajkumar till he gets ready to act presentable.

At the office, Mishra notices that both Rajkumar and Manmeet are absent from their offices and goes to Manmeet’s house to complain against Rajkumar.

However, as Mishra stands by the door while Manmeet goes through the documents, he notices Rajkumar playing with Anmol inside.

Mishra instantly runs away from there as he gets shocked to see Rajkumar inside Manmeet’s house.

Before the day Manmeet leaves for Shimla, she gets called by Bhairav to the office for an urgent meeting.

Manmeet arrives at the office and gets to know that Bhairav wants to increase the floors from 140 to 150 in the Sky City project.

However, Manmeet straightforwardly refuses to do anything like that no adjustments can be made to the building after the construction has finished to such an extent.

Bhairav does not lash out at Manmeet but seems displeased with the response.

Hussain asks Manmeet to reply in a more ethical way so that they can adjust all sides perfectly.

Manmeet replies that she likes to talk in a straightforward manner as Bhairav’s demands are illegal and can risk many lives.

As Hussain learns that Manmeet is taking Rajkumar with her as her fake husband, he gets stunned and says that he was just joking when he suggested him.

Rajkumar tells his family that he is going to Goa with his friends and leaves the house with his luggage.

Finally, after a long journey, Manmeet and Rajkumar reach Manmeet’s house where everyone is waiting for their arrival.

Seeing Manmeet, Ajeet, Puneet, and Gunjan smile with tears in their eyes but soon their expressions change as they spot Rajkumar coming out of the car with Anmol.

The relatives get to know that Anmol is Manmeet’s son and ask Ajeet questions but he goes inside the house without answering.

Manmeet goes inside with Puneet and Gunjan while Rajkumar gets subjected to a variety of questions by the relatives.